Mercury retrograde transcends Jupiter in Sagittarius, and will return to Scorpio on December 2nd for a month’s stay. What is publicized (Jupiter) this week leads to a deeper investigation (Scorpio), a search for lost connections or possibly secret communications. The Sun in Sag forms a square aspect (90 deg, harsh) to Mars in Pisces on the 29th of November reaching partile on December 3rd. indicating challenges to disinformation and can reveal deeper levels of distrust or mismanagement.  With the imminent release of the Mueller report, this could be the timing of that publication. Jupiter and Mercury in conjunction in Sag are indications of publication. Publications of other shady dealings by world governments also are exposed. As I write there is an article about Russia’s use of private military companies and efforts to hold the Kremlin responsible for the secret and illegal operations with PMCs.  Mars in Pisces would represent, therefore, the secretive nature of the military, and Sun in Sag square aspect to Mars indicates the exposure of the practice and possible censure in international court such as the ICC. The Mars lander InSight has just touched down on Mars, giving this an inter-galactic nuance to the exploring nature of Mars in the vastness of the universe (Pisces).

Wednesday November 28th – Mars in Pisces and a sextile aspect (60 deg, friendly) to Saturn in Capricorn, denotes activism (Mars in Pisces) that censures government policies (Saturn in Cap) in efforts to expose the shady operations that are displacing (Mars in Pisces) or harming groups or nationalities (Saturn in Cap).  Mercury retro transits Jupiter in Sagittarius – an indication of the publication of investigations (Mueller report) and as the Sun is in a square aspect (90 deg, harsh) to Mars in Pisces, the explosive nature of the report and other revelations could impact government stability (Saturn and Pluto in Cap). The Moon in Leo traverses to a sextile aspect with Venus in Libra and a trine aspect (120 deg, flowing) to Uranus retro in Aries.  This could trigger the opposition aspect (180 deg, polarizing) forming between Uranus retro in Aries and Venus in Libra. The effect on global markets and political unrest increases tensions build along the US-Mexico border, as migrants seek asylum and opportunity is like a that of tugs and pulls, advances and retreats, hopes and fears, a true approach-avoidance situation.  A quincunx aspect (150 deg, complex) from the Moon to Pluto early in the day, dramatizes the inertia and the powerful nature of the stand-off.

Thursday November 29th – The Moon ingress to Virgo early in the day, in a square aspect (90 deg, harsh) to Mercury retro in Sag, indicates the response to the publications is harsh.  Court actions are implied with Jupiter and the Sun also in Sagittarius. Political maneuvering with the Moon in a square aspect to Jupiter and the Sun combine with the Moon trine aspect (120 deg, flowing) to Saturn in Capricorn, as agreements are reached for orderly processes to proceed. There are charges and counter-charges, hostility and threats, as peace (Venus and the Moon) and war (Uranus and Mars) are balanced as the Moon in Virgo moves to opposition aspect (180 deg, tense) to Mars in Pisces. 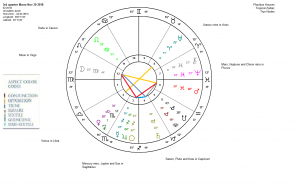 Friday November 30th – With the Virgo Moon’s opposition aspect (180 deg, tense) to Neptune in Pisces early in the day, and the Venus–Uranus opposition aspect reaching partile, there are bound to be many layers of deception abounding. As there are many demands also, list making is advised so as not to forget detailed arrangements for your day. The Sun in the square aspect to Mars also partile today, exposing even more nefarious dealings, or simply misunderstandings. The Moon trine aspect to Pluto helps with practical measures in dealing with authorities. More comes into the open with these aspects, with an emotional impact, and as Mercury retrograde reverts into Scorpio, reviving past issues, especially financial dealings and shared resources of marriage or partnerships. We seem to be opening the “black box” of relationships.

Saturday December 1st – The Moon in the final degree of Virgo is quincunx (150 deg, complex) Uranus retro in Aries, triggering more details of the revelations exposed this week. It is also in a sextile aspect (60 deg, friendly) to Mercury retro at 29 deg Scorpio. How are we to manage the outcomes from a legal or social perspective?  As the Moon ingress Libra as well, balance is called for. The Sun-Mars square aspect (90 deg, harsh) is also partile today. Mars in Pisces can absorb, as the energy digs into the emotional background. The Sun in Sagittarius is adaptable (Sag is the mutable fire sign), and while Mars digs, the Sun empowers arriving at a philosophical outcome, enhanced by the recent conjunction with Jupiter, and also disposed of by Jupiter, a final dispositor in its home sign of Sagittarius. Thus, we are brought out of utter despair. Political positions may differ from legal court decisions. Saturn in Capricorn offers authoritative legal positions, and the Moon triggers this with a square aspect form Libra, as social discussion proceeds, perhaps rejecting the legal decisions or in some way modifying them. A jury deliberates.

Sunday December 2nd – While Venus ingress to Scorpio occurs today (re-entry), the Moon in Libra is quincunx aspect (150 deg, complex) Neptune, a foreshadowing of things to come, as Mars continues to be grilled in Pisces by the Sun square aspect (90 deg, harsh) from Sagittarius, as it progresses to the conjunction aspect (0 deg, combining) with Neptune. Legal issues plague the errant past in this detrimental aspect. One must be cured of evil or face the consequences. Repentance is a path to redemption. The Moon in Libra in a square aspect to Pluto prompts the ultimate in a stern reflection.

Monday December 3rd– The Moon transits to the final degrees of Libra today, igniting the opposition aspect (180 deg, tense) to Uranus. The resulting imbalance, as the Moon slows us to search for balance, along with a conjunction aspect (0 deg, combining) with Venus at 0 deg Scorpio, there is a more compassionate awareness, relating to the dynamics of the opposition aspect with Uranus, which can be very intense. There is a back and forth imbalance – searching for the true median response. Reflecting deeply prevents the too rapid or too impulsive response. A defection of action could be called for now. Accepting painful decisions about the future reduces friction.

Tuesday December 4th – The Scorpio Moon in a trine aspect (120 deg, flowing) to Mars in Pisces today opens the way for a compassionate decision. As barriers are removed, the outlook expands to a more accepting attitude. Mercury retro in Scorpio is in a trine aspect to Chiron in Pisces, and finds more secrets with applying wisdom of spiritual guidance. Ceres in Scorpio as the Moon transits furthers issues of children’s welfare. Their status as individual’s escaping persecution must not allow them to become victims – traumatized by a process of oppression.  The use of the military in the civilian situation seems brutal and excessive.