Wednesday October 7th — The Moon in Gemini is trine aspect to the Sun in Libra. Gemini is ruled by Mercury so the Sun and Moon in air signs buoy enthusiasm with positive speech. Moon is in a square aspect to Neptune retro in Pisces as Neptune is sextile aspect to Jupiter in Capricorn. Jupiter, Pluto and Saturn in Cap, are disposed of by Saturn, ruler of Capricorn.  Mars doubly approaches the square aspect to Pluto, as the Moon is in a quincunx aspect to the 3 planets in Capricorn. This could promote experimental treatments as virus spread continues indicated by Jupiter sextile aspect to Neptune in Pisces. Mercury in an opposition aspect to Uranus in Taurus, an aspect that could block or delay vital communication.

Thursday October 8th — The Moon ingress to Cancer in the morning hours, the sign of the Moon’s rulership, showing strength for recuperation and healing. However, Mars retro in Aries is in a square aspect to Pluto in Cap, repressing the forward push. Mercury in Scorpio remains in the opposition aspect to Uranus in Taurus, possibly interrupting communication. Some matters of importance may be repressed or eliminated under this aspect.

Friday October 9th —The Moon reaches the 3rd quarter phase and is sextile aspect to both Venus and Uranus early morning EDT, and trine aspect to Mercury in Scorpio hours before the square aspect to the Sun. While these aspects may carry an optimistic message, there is danger with the Uranus in Taurus opposition to Mercury in Scorpio, disposed of by Pluto in Cap. The Moon in aspect to both Uranus and Mercury increases the time frame of the active opposition aspect. The official message carries some deception (Mercury in Scorpio). Mars retro in Aries is partile square aspect to Pluto in Cap. The underlying condition is set to explode. The opposition aspect from Moon to Jupiter in Cap near midnight could give a false sense of security. 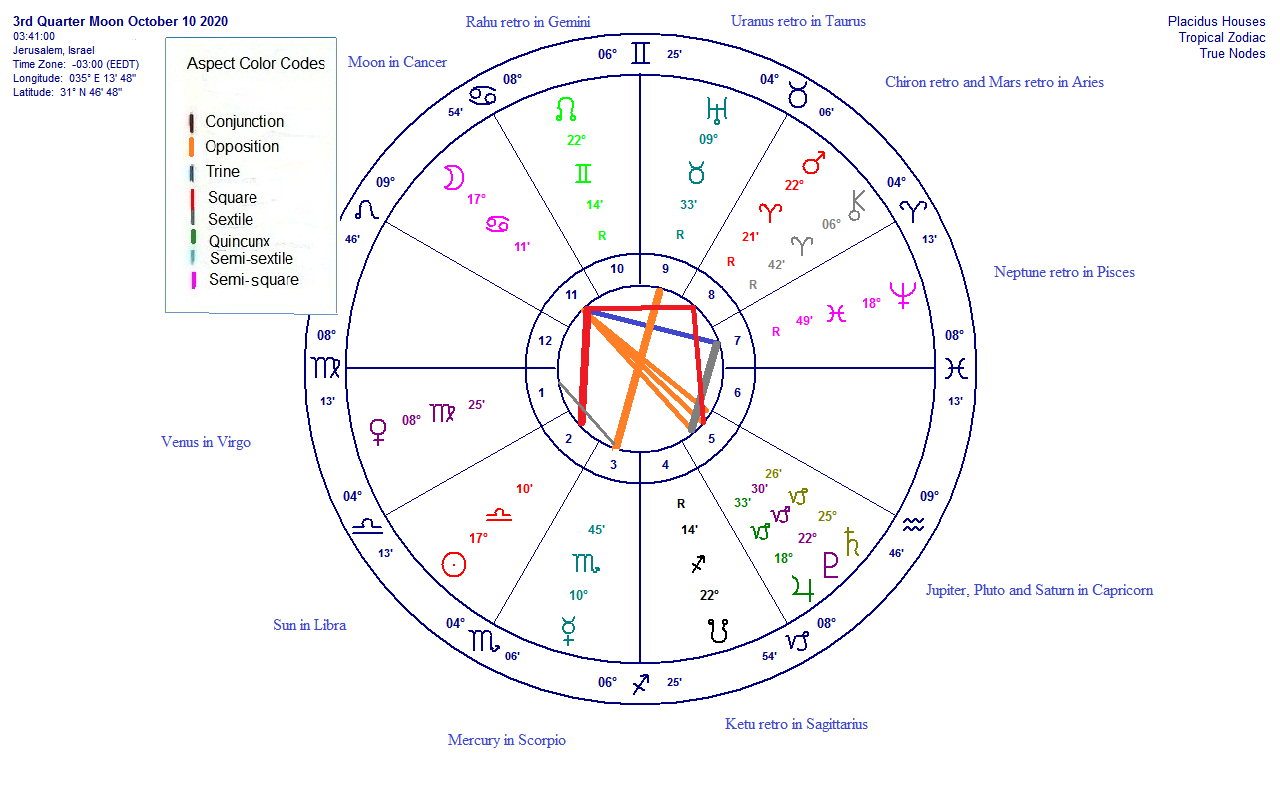 Saturday October 10th — The Moon in Cancer reaches the opposition aspects to the 3 planets in Capricorn — Jupiter, Pluto and Saturn.  The Moon in an opposition aspect to Pluto also makes a T-square with Mars retro in Aries. This could represent efforts to stabilize the situation, that is slowly building to a critical level. As the Moon reaches the opposition aspect to Saturn, some stability is reached. The Sun in Libra is in a square aspect to Jupiter, as the balance is upset, and quincunx aspect to Neptune in Pisces, as a situation deteriorates. Venus in Virgo is trine aspect to Uranus in Taurus for intensive efforts to repair damage, and sextile aspect to Mercury, with communication restored concerning the detailed operation. The Moon ingress to Leo happens overnight.

Monday October 12th — The Moon in Leo, a creative, joyful fixed-fire sign, forms a sextile aspect to the Sun in Libra, with the Moon and Sun both quincunx aspect to Neptune in Pisces, some of the secrets of the pandemic are revealed with the Yod formed. The Moon is also trine aspect to Mars in Aries, as discoveries are made concerning possible treatments, or progress in the development of a vaccine. The Moon is also quincunx aspect to Pluto in Capricorn, along with the quincunx to Neptune for another Yod formation, releasing some of the secrets of the disease. The Moon proceeds to a quincunx aspect to Saturn, with questions raised on technical issues, and then the Moon is in an opposition aspect to Ceres in Aquarius before leaving Leo and ingress to Virgo with some confusion clarified.

Tuesday October 13th — The Moon in Virgo is trine aspect to Uranus in Taurus early in the day, also sextile aspect to Mercury a short time later, activating the opposition aspect between Uranus retro and Mercury now stationary in Scorpio as it prepares to turn retrograde. The Moon is also in a conjunction aspect to Venus in Virgo, as analysis and technical aspects of the efforts to combat the pandemic promote successful outcomes.

Thanks for reading this preview of the week ahead. Stay safe, wear your mask and watch the distance.