Expanded work opportunities bring benefits this week as you can now solve many problems with ingenuity.  Luck is there for many aspects of work planning and medical needs. New opportunities open unexpectedly for those with the right aspects here. However, there is enough good luck to go around.  Hard work can even become easier, as issues that we were confronted with seem to disappear.  Mercury, the fabled Winged Messenger, is now in conjunction with Jupiter (expansion and magnified attention) in Virgo, while Venus approaches the pair, as though to bring extra, serious mindedness (Virgo) and beauty (Venus). Chiron in opposition can be a positive assistance, especially with service occupations.  Attention to dietary needs and routine health issues can result in better health.

Wednesday August 24th – We are more conscious of details now, more concerned about the tiniest flaws, the innuendoes and amplifications of thought, word and deed. The Moon transiting the earth sign Taurus today is trine to Venus, then trine Jupiter and Mercury in succession. Practice to make perfect that opening speech, to prepare the first lesson of the school year and to bring a wide acclaim. Practical applications finally produce results, and most of all, make us very happy.  As Chiron, the wounded healer opposes Venus, we have learned from our past errors and are ready to pass the test, or able to impart wisdom. The exact conjunction of Mars and Saturn in Sagittarius, the power to overcome a persistent issue assures us that the Force is indeed with us. 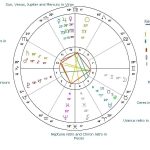 Thursday August 25th – The Moon in Gemini arrives in time to confront (opposition to Mars and Saturn) as the break-up of Saturn and Mars begins. Mars is aggressive and goal-oriented, while stubborn Saturn sticks to principles.  Having a plan is helpful, so now the interrogations begin.  What will the plan of so-and-so accomplish? Will it succeed?  Is it good, or moral or politically correct? Now is the time to differentiate, to get down to brass tacks and eliminate the unworkable procedures. Venus quincunx to Uranus may sugar-coat the aggression, soften the blows. On the other hand, how can you or I work out of a trap that has been laid?  A sharp wit comes to the rescue. A practical (Virgo) consensus (Jupiter) is achieved (Venus, Jupiter and Mercury conjunct in Virgo).  A wide opposition between the Sun in Virgo and Neptune in Pisces could actually be square the Moon opposition to Saturn and Mars. This is an historical moment. The outcome of the closing solar-lunar cycle, the 3rd quarter phase, tends to resolve some issues that are pressing.

Friday August 26th – The Moon is progressing to a square aspect to the triad in Virgo, but with such good energy, what could possibly go wrong? Guarding against unfavorable reviews (Mars and Saturn in Sag), keeping the press at a distance as more gossip (Moon in Gemini), distorts the facts.  With the sextile to Uranus, the image is finally posted in Facebook for the world to see. Not a reversal, but a slight change in tactics, as the mothership sails on.

Saturday August 27th – The Moon is in Cancer with a sextile aspect to the Sun early in the day, as self-pride of work well done, or energy to get the work done, persists. Temptation can lead to intoxication, with a lunar trine to with Uranus square to the Moon, it can get your energy, fluids or ether, moving again. Late in the day, friendly encounters can be enjoyable, and possibly lead to beneficial results.

Neptune in Pisces this afternoon or evening (depending on location and preference). There is always an element of free will, so the choice is still our own. As the Moon opposes Pluto in the morning hours, being prepared to accept the outcome beyond our control is a measure of wisdom. Neptune in a square aspect to Mars and Saturn could force a display of the embarrassing details after all. Let’s hope all records are well kept and in order for your protection, honor or future reference.

Sunday August 28th – In the final decant of Cancer, the Moon is trine to Chiron, a great time for a soothing, healthful spa or massage treatment. Indulge yourself and you’ll be renewed, even if the treatment is a bit abrasive, with Uranus square to the Moon, it can get your energy, fluids or ether, moving again. Late in the day, friendly encounters can be enjoyable, and possibly lead to beneficial results.

Monday August 29th – You may want to break away from restraints today, as standards and limitations seem unclear or actually destructive. Carving a new path (Mars in Sag) may be the only logical answer to a self-destructive pattern of behavior or social interaction. Legal issues may be complicated, as Saturn is still in the square aspect to Neptune (and doubly approaching with Neptune retro). A trine aspect from the Moon (in Leo) to Saturn (in Sag) could bring a more compatible (trine) solution to the Saturn–Neptune quagmire.

Tuesday August 30th – A strategy could now develop to deal with the complications of legal issues and a messy challenge (Saturn squared by Neptune).  Venus moves into Libra, the sign of its own domicile, offering solutions to a sticky problem.  As the lunar cycle nears its close, with a New Moon eclipse on the 1st of September, talent and initiative (Mars in Sag) will be needed to clarify and go the mile, run the course of the battles as proposed and launched in the coming days.