The emphasis is shifting, along with the summer season, to a more personal time, with the Sun and Venus in Cancer, the Moon’s sign, the lunar orb is empowered, as it were, to give us more time for reflection. In our home life we are now challenged to readjust priorities. Challenging aspects, such as the quincunx between Mars and Uranus, oppositions, such as Venus opposite Pluto, and square aspects such as Mercury to Jupiter, represent problems to be overcome. Neptune is in its retrograde phase until Nov 20, a time for reflection and repair, to meet the challenge of social issues.

Wednesday June 22nd – The sextile aspect between the Moon and Mars retro today affirms the adjustments we make to relate to current reality – daily life.  We can work out some deep-seated issues and examine our emotionally fixed attitudes to find workable solutions. Mars quincunx Uranus is at its strength (apex) today, as issues brewing may already have surfaced at the Full Moon or before. This aspect has been in effect for 10 days or more. With every aspect there are positive and negative results. Every individual has the full inner imprint from birth and will react according to environmental and learned characteristics. We should evolve to be able to have a free choice and not be pre-determined by negative imprints from childhood. The Moon moves into Aquarius later in the day, giving a freer range to expression. Mercury, also in a quincunx aspect to Pluto, could advocate for a major shift in policy.

Thursday June 23rd – Ceres, the major asteroid, acts, it seems, protectively, and conj Uranus in Aries, is able to modify the more irrational side of Uranus power, directing us in a more compassionate vein.  Uranus is strong in the US natal chart, the chart of the new administration with traditionally with Sun at 0 deg Aquarius. Administrative moves must call to mind the character of the nation. The Moon in Aquarius is quincunx Sun and Venus today, as inspiration and will power can overcome traditional or even personal interest could prevail.  Creative departures from the norm can be expressed today. With Saturn’s harsh square aspect to Neptune reducing the strength for dissolution, refining the limits may become less imperative. There are sure to be some compromises made in the final analysis.

Friday June 24th – The square aspect between the Moon in Aquarius and Mars retro in Scorpio today is a sign of reactionary results. Expressions of disagreement and counter-actions may be deployed with the Moon sextile to Uranus. Reactions to the Brexit vote, for example, and measures for control of munitions around the world are relevant to these aspects. The decisions made democratically or through an organized system of power, reflect the social norms and processes within society. The Moon’s sextile aspect to Uranus is a sign of a working agreement in the offing. This may serve to help mitigate the negative outcome of the square aspect from the Moon to Mars.

Saturday June 25th – The Moon in Pisces today and in a trine aspect to the Sun and Venus indicates a pleasant and probably relaxing day. Activities center on personal interests and group involvement, with Jupiter trine Pluto in earth signs. Chiron in an exact conjunction with Uranus is some balance for the harshness of the Uranus energy in Aries. Lessons can be learned through experience, and sometimes through solving emotional riddles. Playtime is therefore productive as well. The Moon transits Neptune before the end of this 24 hour period. 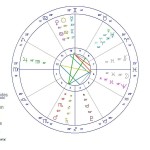 Sunday June 26th – Emotional fulfillment is a power of the day, as the Moon opposes Jupiter in Virgo, sextile to Pluto and trine to Mars, finally ending with a challenging aspect to Mercury. The picture of an activity filled day, releasing pent up energy. Sports events, jogging or hiking are recommended. Care to avoid accidents, of course, as Jupiter may increase vulnerability of the Pisces Moon.  Mental activity is ideal for the late afternoon, as Mercury is then in harsh aspect from the Moon. Illusions may play tricks on the mind. The Yod formation, involving Mars retro, Mercury and Uranus–Ceres, gives a sense of connectedness, or perhaps, déjà vu.

Monday June 27th – The Moon in Aries today, in the final quarter of the soli-lunar cycle, culminating in Cancer on the 4th of July, coincides with a morning rush, a crisis in resolution of issues this past week. Does one continue a campaign that has been defeated? Does one continue to carry a torch or develop a grudge?  The Moon in a square aspect (harsh) to inviting Venus could let down your guard. Smile and persevere, as the trine to Saturn at the same moment gives courage and strength in the face of defeat.

Tuesday June 28th – Personal popularity today could depend on your views. Are you for or against? Aligning with the majority may be a struggle, however, the ability to join with peer groups is inviting. Integrating (Jupiter) with the common view (Virgo) is more realistic than taking the adversary role. Remolding (Neptune) the future requires understanding the present policy (Saturn). While we can congratulate the democratic (Uranus) process, anxiety remains, with Mars retro in Scorpio quincunx to Uranus–Ceres in Aries. The search to reverse the decisions of the past week is underway.

With blessings for a secure and enjoyable week,
Gimelstar
Jerusalem, Israel
June 21, 2016