The Moon has circumvented the Earth and is now ready to begin the journey through the zodiac signs beginning with Aries, the primordial quality that initiates the cycle. Mars, the ruler of Aries, is moving retrograde in Aquarius to begin the week, in an exact square aspect to Uranus. This should really give an explosive finale to this approaching aspect of the past few days. We can expect that there would be political as well as geological (Uranus in Taurus) reverberations to this intense, harsh aspect.  Saturn in a trine aspect to Uranus is limiting the more destructive aspects, although the desirable growth results could also be redefined and muted. While there is a revolution underfoot with Mars square aspect to Uranus, Saturn keeps the more shocking developments under control, focused and standardized.  We constantly keep in mind an analytical measure that prevents a run-away revolution. Jupiter is doubly approaching a trine aspect with Neptune this week, deepening the emotional appeal of the ongoing situation. During the Mercury retrograde phase this week, problems with communication, Internet access, appointment scheduling could interfere with planed events. Keeping updated and on the cutting edge of progress in personal lives takes on increased importance.

Wednesday August 1st – The Moon in Aries is full of action, the conjunction (0 deg, combining) with Chiron cautions us to apply lessons learned, and avoid too aggressive a stance. The dispositor of the Moon and Chiron is Mars transiting while retrograde in the fixed sign of Aquarius. This is prone to inward reflection rather than the typical Mars influence of aggressive goal oriented action. As we apply the brakes, Saturn retro in Capricorn is in a semi–sextile (30 deg, mildly favorable) to Mars.  However, Saturn should do little to counteract the sharp square aspect (90 deg, harsh) of Mars to Uranus in Taurus. The Moon will promote Saturn into a stronger role with the square aspect from Aries, even as Saturn approaches by 1 deg, the trine aspect (120 deg, easy) to Uranus.  Yet, with a softened Mars, Saturn may win out. Mars in Aquarius is disposited by Uranus, so the political earthquake of Saturn in Capricorn (also the dispositor of Pluto and a final dispositor in the sign of rulership – Capricorn) determines the limitations, the legal standards that are the backbone of the political system, contains the regressive elements that are eroding the very principles of democratic institutions. In the end, the application of force (Mars) will force (square aspect) revolutionary (Aquarius) adjustments or procedures (Saturn) that could be now applied to the unprecedented (Uranus) situation. The events described are not short of earthshaking. The trine aspect of the Moon to the Sun late in the day gives satisfaction, with the assurance that the powers for the greater good are in control.

Thursday August 2nd – The Moon in Aries in a quincunx aspect (150 deg, complex) to Jupiter in Scorpio, allows for reflection on successes while difficulties remain. The Moon is also in a square aspect (90 deg, harsh) to Pluto, then trine aspect (120 deg, flowing) to Mercury, as more clarifications of the deep-rooted issues involved are made.  A quincunx aspect to Venus in Virgo follows, as practical alliances give reassurance for the viability of goals to preserve the basis of political and national integrity.

Friday August 3rd –  Jupiter in Scorpio applies to a trine aspect (120 deg, flowing) to Neptune in Pisces. A resolution of the problems for reunification of immigrant families begins, as there is a reformation of legal restrictions facilitating location of absent parents, such as those who were deported without their children. Ceres in Virgo is in an opposition aspect (180, tense) to Neptune in Pisces and sextile to Jupiter in Scorpio, promising that justice would be applied to the cause, and suggests housing for the homeless and indigent sector. The Moon ingress to Taurus in the afternoon hours. The Moon then transits Uranus, at 2 deg Taurus. Unsettling events place more urgency on finding solutions, as Saturn retro in Capricorn and Mars retro in Aquarius are also energized, with conflicting powers. 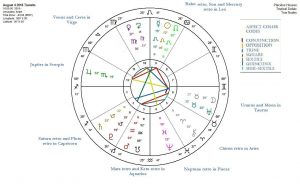 Saturday August 4th – Today the Moon in Taurus is in an opposition aspect (180 deg, tense) to Jupiter and reaches the culminating square aspect with the Sun in Leo.  [see above graphic]. Hopefully this leads to more favorable solutions for migrants. Funds may be released, with a Congress forced to act on the border wall project. Compromises may be made, however. as Mercury is in a quincunx aspect (150 deg, complex) to Pluto while the Moon is trine aspect (120 deg, flowing) to Ceres in Virgo, and Uranus trine to Saturn retro in Cap. The complex problems cannot be solved with simple solutions.

Sunday August 5th – The Moon now in the 3rd decant of Taurus forms a comfortable trine aspect with Venus in Virgo. The lunar ingress to Gemini later in the day, forms a trine aspect (120 deg, easy) to Mars in Aquarius and a quincunx aspect (150 deg, complex) to Saturn in Cap.  This seems a reversal of the mood of two days ago, when the restrictions were more acceptable. A change in attitude could reverse decisions, reducing pressure and removing restrictions for a more relaxed day.

Monday August 6th – The trine aspect (120 deg, easy) between Saturn and Uranus involves the combination of the revolutionary and the traditional for mutual benefit. The Sun in Leo is in a square aspect to Jupiter in Scorpio, while Jupiter is trine to Neptune in Pisces.  Supportive measures are needed to overcome sensitive issues in relationships. The abuse of power lead to victimizations of the powerless (Neptune).  The opening of avenues for expression and relief, leads to a healing.  Venus ingress to Libra late in the day, for more insight and questions on relationships and marriage.

Tuesday August 7th –  Venus in Libra is in a trine aspect (120 deg, flowing) to Mars in Aquarius, signify relationships and marriage. Venus is the ruler of Libra, as universal goals (Mars in Aquarius) align with value in partnership and marriage.  Chiron retro in Aries is in an opposition aspect (180 deg, tense) to Venus, as healing of the past is relevant to the contract engaged in today.  Uranus turns retrograde, delaying a conflict until mid-September, giving time for more stability as Saturn turns direct in early September, then travels along with Mars for the encounter with Uranus. Threats of open conflict are nullified.