The high energy recedes this week at Mars ingress to Pisces on Thursday, Venus turns direct on Friday to take up some lose ends. With Mercury turning retrograde the following day in Sagittarius. Clearly, there is work to be done: repairing legal-political systems, welfare systems, and of course rebuilding after disastrous fires. While the laws of nature are relentless, the end of the cycle of the zodiac prepares for renewal with Mars in Pisces. A gathering in Paris commemorating the end of WWI, and protesting Trump’s nationalistic claims, brings a new dimension in his lack of support world-wide.  With Mars, yet in Aquarius, and Venus in Libra, the calls for peace and world unity were undeniable. Mars in Pisces is the broomstick that cleans out stagnating material.

Wednesday November 14th – With the Moon and Mars in Aquarius we a reminded (Moon) of our idealistic (Aquarius) goals (Mars).  Mercury in Sag (teacher or preacher) is in a square aspect (90 deg, harsh) to Neptune in Pisces (human suffering).  How to address the ills of the season becomes the subject of leaders and prophets, idealistic speech-makers. Mars in a sextile (60 deg, friendly) relationship with Uranus in Aries could promote upsetting ideas with a revolutionary fervor. We are propelled toward the future as idealism seeks to upset tradition (Pluto and Saturn in Cap).  The Sun in Scorpio regenerates life from the darkest moments. 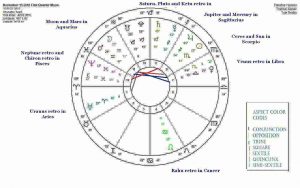 Thursday November 15th – The Moon in Aquarius forms a square aspect (90 deg, harsh) to the Sun for the 1st lunar quarter phase. Ideals and leadership is challenged. At this waxing phase of the lunar cycle, the new direction one takes need to be clearly delineated. The Moon is then in a trine aspect (120 deg, flowing) to Venus in Libra, as Venus slows to return to direct motion. Visions of a greater future allure us.  The Lunar conjunction with Mars (0 deg, combining) aspect a few hours later is sextile (60 dg, friendly) to Uranus and square aspect (harsh) to Jupiter in Sag. This could trigger explosive issues or reactionary violent actions that seek to disrupt the status quo.

Friday November 16th – The Moon and Mars are now in Pisces and form a square aspect (90 deg, harsh) to Jupiter in Sag. Mercury also in Sag is also in a square aspect to Neptune in Pisces. Mars is disposed of by Neptune, so it looks as though the actions perpetrated are for universal dissolution. This could be very destructive or quite inspirational. Extremism and chaos ensue.  The need to rehabilitate was never felt more acutely. Human health services are stretched to capacity.

Saturday November 17th – While Venus in Libra turns direct motion, Mercury in Sag in a square aspect (90 deg, harsh) to Neptune in Pisces turns retrograde. We are forced to retreat as plans are demolished. (!!!)  Blocked energy is dissolved in Pisces, as the Moon moves through from Mars to Neptune. Institutions’ failure produces more poverty and hunger worldwide. Poverty in Western developed nations such as England and the US has reached greater proportions. US Veterans are not receiving their housing benefits.

Sunday November 18th –In a more hopeful sign, the Moon in Pisces is trine aspect (120 deg, flowing) to the Sun in Scorp, and conjunct to Chiron on its way to ingress Aries. Energy is buoyed up with more hope. Ceres at 2 deg Scorpio is semi-sextile (30 deg, acute) to Jupiter and trine aspect to Mars in Pisces, as care for survivors gets a boost. The Moon conjunct (0 deg, combining) aspect to Chiron at 28 deg Pisces early in the day helps us look to the future with hope. Mercury retro is in a square aspect (90 deg, harsh) to Neptune, as destruction is assessed. A quincunx aspect (150 deg, complex) from Ceres to the Moon readjusts priorities for a creative venture on hand.

Monday November 19th –  Saturn in Cap requires structure and imposes limits, while giving focus. The fire energy of the Moon in Aries and Jupiter in Sag provide the will and power to succeed. The Moon trine aspect (120 deg, easy) to Mercury retro inspires minds to repair as well as improve. The lunar nodes (Ketu and Rahu) give attention to the basic structural process. Rahu looks toward change and modernization, while Ketu destroys what is no longer needed. Ketu in Capricorn eliminates the past order while Rahu in Cancer builds a safer future.

Tuesday November 20th – The Moon in Aries is in an opposition aspect (180 deg, tension) to Venus in Libra today. Venus requests that we slow down the furious pace we have taken up, to give more consideration for balance and health. We should not be thoughtless for safety measures. With the Moon’s conjunction (0 deg, combining) with Uranus later in the day, the unexpected occurrence could overwhelm and reduce the flow of activity.  The Sun quincunx aspect (150 deg, complex) to Uranus) applying creative thought on the run could save the day your own life.

Take care and have a great week!