In astrology as in other personality theories, the whole is greater than the sum of its parts. As we have information about the natal charts of Stephen Paddock and other criminally disturbed psychopaths, we can see how the planetary arrangements led to his particular obsessions and pathology. How the tragedy on October 1st could have been prevented is the greater issue at this time. As a free society we abhor undermining free will. Paddock acted under a combination of legal and personal free will in acquiring his arsenal. Identifying and limiting gun ownership is more a possibility than identifying mental illness and the potential for violence.  It is not enough, to my way of thinking, to say that he was mentally ill, and not to reform gun ownership laws.  Astrology can be an important method of reaching individual inner conflicts, but can only assist if that individual is willing to work on him or herself. As in other counseling techniques the progress can be significant to the extent that the unraveling the character can proceed in a beneficial and cooperative atmosphere.

Wednesday October 11th – The Moon in Cancer today, opposes Pluto ( 180 deg aspect), the impersonal power that so often preserves our fate. A Cancer personality is self-protective overall. This conflict with Pluto in Capricorn could lead in some cases to suppression of the voices for greater personal health options, for example, that rest in the power of legislative government officials.  The sign Cancer is especially concerned with care for family, women and children, and for selfhood, most of all, in issues of health and responsibility. Mars in Virgo is in a square aspect (90 deg, harsh) to Saturn in Sagittarius today, as open conflicts result. As both Sag and Virgo are mutable signs, some flexibility is possible. However, Saturn is the immovable force while Mars is aggressive and goal oriented. Working for a solution is very difficult. Mercury in Libra is moving toward the sextile aspect (60 deg, working) with Sagittarius. This is an indication that reasonable arguments may persuade the even the sternest of judges. Moving forward and delaying the outcome for a day or two could yield better results.

Thursday October 12th – The third quarter Moon phase is reached with a climatic resolution, with the Sun conjunct Mercury in Libra, it would be difficult to continue the oppressive arguments. The resolution is hopefully the best for all involved. Libra may not offer everything you wanted, but a balance should be available.  Sorry, but Jupiter in Scorpio is not about sleepovers. It is more about soul searching and or psychoanalysis. There is still  the question of what went wrong, what continues to go wrong when dozens of innocent people are shot dead by a man with 47 guns and tons of explosives at his disposal. Has the gamboling spirit, the alcohol mania, the NRA power finally reached the dénouement? Building walls will not eliminate the threat from within. The eternal debate over gun laws and prevention of gun homicides continues. Powerful groups maintain Power (Pluto in Capricorn). 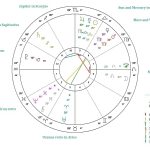 Friday October 13th – The Moon in Leo is square (90 deg aspect) to Jupiter, a robust and strong contact, enjoyable while somewhat revealing. Some may take a joke on themselves with good humor.  The fixed signs of Leo and Scorpio draw attention, rather than distribute energy outward. The Moon encounters Ceres at 6 deg Leo, so concern for the children’s welfare is admirable at this time. What legacy does today leave for the children of tomorrow? How to explain freedom when gunmen are so often threatening life?  The gun culture (Mars in Libra) is in opposition to inner truth (Chiron in Pisces). With the midpoint of Venus and Mars in Virgo quincunx (150 deg aspect) Uranus in Aries, neurosis is rampant, or may in fact find the source of its own dis-ease. While the Sun is separating from the square aspect (80 deg, harsh) to Pluto and approaching the sextile (60 deg, friendly) to Saturn, a more ordered way of existence is envisioned.  Fate seems to be under control again. Mercury in Libra in a sextile aspect (60 deg, harmonious) to Saturn finds some rationale to conformity and a more measured or balanced view of the task at hand. While we may limit our time to focus on the immediate situation, larger issues remain in the background.

Saturday October 14th – Venus has entered Libra overnight, into the sign where it shines the brightest, with a semi–sextile aspect (30 deg mildly compatible) to Jupiter in Scorpio.  The Moon forms a quincunx (150 deg, complicated) to Pluto early in the day, as though allowing and neglecting the forces, in a quixotic playful mood. Then the Moon will be in a trine aspect (120 deg, friendly) to Saturn, as recognition of the cleverness gets its due. A grand-trine (planets aspect in all fire signs) then forms with Uranus in Aries as the wave of recognition takes on a life of its own. With Mercury in opposition aspect (180 deg, tense) more information (Mercury) can be drawn out of the inferno (Uranus in Aries). The grand trine in fire signs is rapid as the Moon moves forward in 3-4 hours, although Saturn’s involvement could be the marker of lasting importance historically.   The raging fires in California come to mind here. Mars in Virgo opposes Chiron in Pisces, as a measure of wisdom is sought, although difficult to accept the results that could be painful.

Sunday October 15th – The Moon is sextile (60 deg aspect) to Mercury and then to Jupiter, as it changes into the receptive (yin) sign of Virgo. Here there is a calmer, more self- assured moment, with the knowledge and serenity of Mercury and Jupiter. Venus in Libra is semi-sextile (30 deg, minor but favorable aspect) to both Jupiter and the Moon. With the Sun in Libra with a sextile aspect (60 deg approaching, friendly) to Saturn in Sagittarius, there is a sense that agreements will be made at last.

Monday October 16th – With the Moon and Mars in Virgo, cleanup, repair and building is moving forward, although the quincunx aspect (150 deg, complicated) of Mars to Uranus is a potential disagreement or reversal. Hopefully it is not a signification of a major flare-up although in these tense times, that also could happen. The Moon moves to a trine aspect with Pluto in earth signs (120 deg, easy) so that a practical version of the plan could be agreed on. Some details are worked out to allow for acceptance. With the Sun sextile aspect to Saturn (60 deg favorable), the will to advance beyond the sticking points is there.

Tuesday October 17th – With the Moon conjunct Mars in Virgo, work proceeds feverishly to complete the tasks, large or small. With six planets within 35 deg of the arc from 27 Virgo to 2 deg Scorpio, opposed by the powerful forces of nature or our inner demons, Uranus in Aries and Neptune in Pisces, power becomes more polarized.  Saturn, meanwhile is doubly approaching a trine aspect to Uranus, as the erratic or revolutionary forces become under greater control. In the next day or two, the Sun’s opposition to Uranus will be more overt, as the will to deal with opposition that could derail power or overthrow leaders becomes stronger.