At this time, post-election, we can view the personalities of the two contestants with greater clarity. It is also their similarities which are striking. In both charts you can see the overall pattern of the Moon standing outside the main group of planets which seem to be in only one sector of the wheel. The Moon in Donald’s chart is in Sagittarius, a integrative fire sign, while in Hillary’s chart it is in Pisces, the universal water sign. Donald is more energetic in his reflective nature, while Hillary is as a liberated and evolved person, in her 7th decade, transcendent and actually lacking emotional response. The Moon represents the most personal self, the soul-self or the reflective, often describing the past and early life experience embodied in the psyche of the individual. In fire signs is is aggressive, while in water signs reflective and often emotionally retentive.

Another feature they have in common is the lack of a planet or luminary in an earth sign. the three earth signs, Taurus, Virgo and Capricorn give grounding, practicality and organized control. Hillary, by my analysis could have Capricorn on the Ascendant. This is most obvious when you listen to her speaking, meet her in person, or read her correspondence. This, however is a mask of the persona, not an innate energy, as a planet in an earth sign would be.

Neither of the candidates are detail oriented, nor do we see careful analysis in their presentations. Both paint pictures with words and describe themselves or others (opponents) but rarely are convincing with the data or hard facts. When a chart lacks an element, the result is a sort of groping to find a compensating achievement.  In that way they each have something to prove. 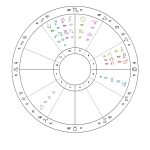 The time of birth for Hillary is unknown, however I have put a Noon chart here, giving Capricorn on the Ascendent which I think is quite accurate for her, and her careful, measured approach.