While the Democratic nominee has long been in the public service in a supportive role, her ascendance to the nomination, her fame a glass ceiling breaker has been the focus of national interest. The opposing contender, Donald Trump has tried to make the most of this event in his criticisms that fall short, like arrows dented on armor of steel. Several very pathetic attempts were launched to bolster his self-esteem and pull himself forward in the race to the White House. 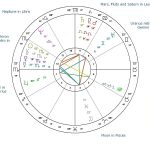 Back in January, I included Hillary’s birthchart in my week’s comments:

Hillary Clinton, with a natal Sun, Venus, Chiron and Mercury in Scorpio, prospers with Mars activating her personal power (see above chart with time of 8:02 am- actual time of birth unknown). She also has a healing touch with the Chiron in the Scorpio group, and is a wounded healer that Chiron signifies.

Her personal history and the testimonies of those who knew her best, are stirring. Those who feel turned off by this promotion are certainly biased.  Her selfless service is the best of Pisces. Many people are unable to appreciate this sign of humanitarian service and empathy that none can equal. This is a major part of the social/moral roadblock that women have been up against for hundreds of years.  Yet, women are in the majority in the US, and at last the nomination shows that women have been working for more political representation for decades.

Looking a Hillary’s chart again I was struck by how well she has integrated the Pisces Moon with her other natal planets, and with transiting Jupiter, the planet of luck and success, opposing her natal Moon. This is a favorable aspect with the two planets involved, allowing for self analysis and self-correction as it projects her total being.  Natal Ceres opposes her natal Sun with a within an orb of one degree. This, as her only aspect of opposition, is indicative of a concern with nurturing, especially in Taurus. It symbolizes what is most natural, and concern with care and respect for others.   Hillary has a natal Moon in Pisces, and three planets plus Chiron in Scorpio. She is well acquainted with her own emotional nature and her unconscious realm.  She is armored with appropriate responses when the time arises. She is rarely caught off-guard.

Donald’s natal chart is characterized by the Moon in Sagittarius opposing Uranus and Natal Sun. Jupiter also is trine Uranus, which highlights his spontaneity and rapid response style. He has used his acumen to acquire wealth. The predominance of planets in air signs, Gemini and Libra, show that he has communication skills, although a lack of planets in earth signs indicates that his material wealth evolve from mental and emotional control, rather than a true need to build his empire. He has an emotional need to fulfill, a power need, but maybe not a material need. He wants the admiration of others, but his intellectual realm is shallow. Libra needs to balance opposing issues in order to stay aware. Yet, because he is often out of balance he generates power. Mars in Leo is full of pride, so self-worth is not a goal but a condition.

Hillary lacks planets in earth signs in her natal chart also. However, she has an equal balance of planets in fire and water elements. Like Donald, her natal planets are within the signs of Gemini to Sagittarius, although she lacks opposition aspects. Her natal Moon in Pisces acts as a focus and a filter for her conscious actions. She is rarely caught off guard, is not shallow by nature and is well balanced in thought and action. Natal Mars and Pluto are in conjunction in Leo, as her personal will is subordinated by the collective will. She is devoted to service with the Moon in Pisces and Mercury retro is in a square aspect to Saturn, as she shows intellectual strength and tenacity.  She works for her achievement and is usually rewarded. While she attains a political life (Jupiter in Sag) it is not well integrated into her personality. She is not, after all a seeker of fame and fortune.

While Donald has a talent for rapid fire response, he covers his lack of factual foundation to his claims with effusive bravado (Mars in Leo).  While Hillary’s natal Mars in Leo is closely guarded by Pluto (dispositor of her planets in Scorpio), Donald’s Leo Mars is drawn out by aspects to his Sun and Moon.

Going into the month of August, however, some of the Donald’s worst attacks are launched. Currently, 4 planets are transiting (including the Moon) in Virgo, opposed by Neptune in Pisces and Chiron in Pisces.  I believe that Hillary is more in touch with her unconscious self than Donald who is unaware of his own shadow.  Neptune is a symbolic energy that works on the unconscious level. It promotes psychic influences and therefore speech and behavior that is not pre-rehearsed or even thought out.  Donald uses off-the-cuff speech predominantly, so that much of what he says reveals more about himself than about his subject. With Ceres in Aquarius opposing his natal Pluto in Leo, what comes natural for Donald is his lust for power over others. This is his own downfall, his tragic flaw.