With the rising specter of North Korean aggression, threats to attack with nuclear armaments, and the presidential primary campaigns, the planets Saturn and Jupiter continue to approach a square aspect, while Jupiter retro is in a quincunx aspect (150 deg) to Uranus, and Pluto is doubly approaching a trine aspect with Jupiter (expanding world power). A square aspect from Pluto to Uranus is also effective, although it is never reached, as Pluto turns retrograde and Uranus moves on.  While these planets move slowly from Earth’s perspective, they are long-lasting and profound in effect, influencing generational and coincide with massive power affecting large populations.  We should watch behind our backs. Late in the year, in November after the presidential elections, Pluto will be in a square aspect to Jupiter in Libra. Jupiter is then forming an opposition to Uranus, which could ignite megalomaniac ambitions, while a new administration is yet to take office.

At the New Moon on the 8th-9th, also an eclipse, there is a stellium (5 or more planets in a sign) in Pisces, the mutable water sign, dissolution in issues predominates. Displaced people, migrants over land and sea, are unable to find safety. At the same time, Mars is more aggressive in the fire sign of Sagittarius, aiding those seeking refuge and promoting rescue operations.

Wednesday March 9th – The New Moon opposed to Jupiter in Virgo, could bring earthly woes. Jupiter holds the focus of the chart, even as Pluto and Saturn are bolstering with approaching aspects.  The possibility of an overwhelming international urgency gives Jupiter the planet of social gatherings and enhanced resources in an earth sign, his glory; denoting the power of the vote, the opinion of the social organizations in a democracy, and a possibility of revolutionary actions that exists everywhere. The releasing of old patterns of social union was never more obvious (a stellium in Pisces). The initiation of new ideas (Uranus in Aries) and idealism in government (Saturn in Sag) brings new inspiration, fears and doubt.

Thursday March 10th – The Moon enters Aries today, with a trine (120 deg) aspect to Mars in Sagittarius, as a new turn or entirely new projects are initiated. The awakening at the New Moon illuminates the suffering of humanity. As the Moon is then in a trine aspect to Saturn, relief organizations (Saturn in Sag) are motivated into action (Moon in Aries). The activities involved may be arduous, and the ability to relieve the magnitude of suffering limited.  Hopefully the peaceful use of power and organizations to relive suffering will be the objective, and not the destructive use of weapons of destruction. However, the threats cannot be completely eliminated. The conflict may be contained for now, but could again erupt in the future. Mercury in Pisces is conjunct Neptune as information is distorted or inaccurate, yet impacts many. Electric power and utilities may be affected. The possibility of the use of lethal gas or other poisonous substances is also a danger now.

Friday March 11th – It is fortunate and the advantage is highlighted, that a democratic process will promote a moderation of extremism. While dictatorial regimes use military force and methods of submission to control their populations (Pluto square to Uranus) the democratic process gives power to the electorate (Jupiter trine Pluto).  A surge in political opinion is forthcoming, as issues are examined (Saturn tine Uranus) with more power to the voter and the common people.  (Jupiter trine to Pluto)

Saturday March 12th – This important transition in time can be noted as a victory for a working democracy, selecting candidates, and filtering out the popular choice for leadership positions. Jupiter square to Saturn promotes the examination of details of position and attitude on political issues facing us all. More pressure and more scrutiny is desirable.  A grand trine in earth involving the Moon trine Jupiter and trine Pluto, as power seems to work for a beneficial end, providing for the earthly organized distribution of necessities. Multi-national organizations (Pluto in Capricorn) take initiative (Moon in Taurus) to expand their reach (Jupiter in Virgo).

Sunday March 13th – Venus enters Pisces. Although the Moon is now in Taurus, with Ceres and Chiron, the Sun, Neptune and Mercury, there are now 6 celestial bodies in the Sign of Pisces, a highly saturated concentration. This continues to be a time of transition, a general diffusion of energy on one hand, and a rising and expanding interest in countering the agents of dissolution with Jupiter opposed in Virgo. However, as Saturn in Sag guards the ambitions with a legal check, also through publication in media (Sagittarius), the exposure widens, rather than narrows. Opportunities are sought to exploit the issues for gain, the grand–trine in earth signs operates until mid-day. 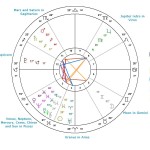 Monday March 14th – As the Moon in Gemini opposes Mars in Sag, Venus in Pisces takes up the point of focus.  This is an open conflict (Mars square to Venus) that develops and is an aggressively staged event that is effectively undermined (Venus in Pisces) as more intelligence (Moon in Gemini) is brought out. The person who knows her part well prevails. The Jupiter trine to Pluto becomes tighter. This is an expanding role for power, and universal representation in law and order.

Tuesday March 15th – The Grand-Cross formation, dominates with Mercury opposed by Jupiter and Saturn opposed by the Moon, in formation of square aspects between the Moon and Mercury, Mercury and Saturn, and Saturn square Jupiter. Ceres has joined with Mercury in Pisces, giving broader support through the investigative reporting (Mercury is the dispositor of the Moon in Gemini).  Factual evidence is dug out to bring out claims previously undisclosed. Pisces, as the home of the universal solvent, will eliminate and equalize in the end, as transitions to a new order are taking place, with Uranus leading the way in Aries.  Although a power struggle may ensue, there is a change in status and legal procedure to benefit more of the unrepresented in the population.