The Moon’s transit through Capricorn, Aquarius and Pisces this week draws together disparate events as they become clearer to the observer of the interrelated matters. The comprehensive effect of the issues will be highlighted at the Full Moon on the 26th of August. The Universal signs are activated by the Moon and the planets by conjunction or other major aspects to the Moon. The Sun moves into Virgo on the 22nd, and on the 24-25th creates a grand-trine in earth signs connecting to the innovative Uranus that has particularized the limitations of Saturn, and the counter move to suppress innovation.  The Sun at the Full Moon is then the pivotal power informing adjustments that could be made to produce a working agreement. Saturn slows progress to reverse (apparent) direction on September 7th, resuming the direct motion, interrupted on April 18th with the retrograde phase.

Wednesday August 22nd – The Sun shines its final rays of Leo today, as the Moon darkens the mood with a transit of Pluto in Capricorn. While the Moon’s transit of Saturn yesterday could be the harbinger of deep trouble, the conjunction with Pluto exposes complex issues in greater depth and could mean a turn of events that reveals inside actions and actors. This could be an upheaval, as subversive elements are exposed, necessitating a reworking of departmental organizations (Pluto in Capricorn).  The Sun ingress to Virgo improves conditions for work or study, as we are drawn to participate in advanced programs, or programs advancing personal goals.

Thursday August 23rd – The Moon’s transit of Mars retrograde in Capricorn early today indicates aggressive action taken. Personal initiative allows for a deeper comprehension of work involved in planning for the future.  Participation in group forums for constructive planning for innovative working paradigms prove positive for future success on a social and universal level as well as for personal achievement. With Saturn trine aspect (120 deg, easy) to Uranus, we are focusing on natural resources (Taurus) and technology (Capricorn) to use in innovative ways (Uranus) to streamline distribution of resources (Saturn). The Moon ingress to Aquarius is in a square aspect (90 deg, conflict) to Uranus and semi-sextile (30 deg, initiative) to Saturn, gives an avenue for individual expression.

Friday August 24th –  Communication becomes intensive with Mercury in Leo opposition aspect (180 deg, tension) to the Moon in Aquarius, as more individual participation in a post-traumatic experience, Jupiter transcends the trine aspect (120 deg, flowing) with Neptune, for a collective response to misleading or corrupt claims. Responses are elicited with the Moon-Mercury opposition, while Jupiter is the focal point of a T-square formation to Moon–Mercury opposition, as public responses on media platform can alter perceptions. The Moon also is in a trine aspect to Venus in Libra, as professional balance is sought.

Saturday August 25th – The Grand-Trine in earth signs dominates the day with an optimistic mood. Mercury advances in the quincunx aspect (150 deg, problematic) to Neptune, as dis-information as analyzed, and abuses of the system are reviewed with the three retrograde planets in Capricorn (Saturn, Pluto and Mars), and the Moon ingress to Pisces, for the final announcements, as we approach the Full Moon in Pisces. 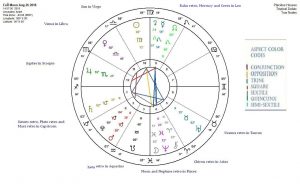 Sunday August 26th – The Full Moon aspect culminates in the morning hours US times, Mid-day in Europe and afternoon hours in the Mid-East and Far East [see image above]. The Moon forms sextile aspects (60 deg, friendly) to both Saturn in Capricorn and Uranus in Taurus, thus augmenting the Full Moon with the Grand–Trine in earth (see the comments for Saturday). This seems to be a celebratory mood, honoring the work of a system that has a democratic basis, and responsive to the needs of the day.  Venus in Libra reacts in a square aspect (90 deg, harsh) to Pluto in Capricorn, as the judgements are under attack from critics.

Monday August 27th – The Moon transits Neptune in Pisces as the trine aspect (120 deg, flowing) to Jupiter is strengthened by the lunar transit. Confusion and delusive comments take the upper hand today, although that may diminish by evening as the Moon moves on. Mercury in a quincunx aspect (150 deg, complex) to Neptune-Moon, and as such, messages are rather elusive in the ability to explain the arguments, which grow more confusing.  Conspirators thrive in the climate of the day.

Tuesday August 28th – The Moon is in a sextile aspect (60 deg, friendly) to Mars retrograde in Capricorn, as Mars reverts to direct motion today. The information received at the Full Moon and Grand-Trine becomes ingrained in consciousness as in actions, realigning goals and priorities. The Moon ingress to Aries in the evening hours in the US, overnight in the Eastern part of the globe.  Mars breaks rank with the slow-moving retrograde planets, and leads the way out of the long months of self-imposed review and revision of government and leadership. The delays and restrictions imposed continue, although a light is shone ahead to lead the way from the labyrinth.