Jupiter continues retrograde in Virgo. Jupiter (expansion) is the natural ruler of Sagittarius. In a retrograde motion, its influence internalizes to a greater degree. The internalizing (retro) of the political (Sagittarius) process, and analysis (Virgo) continues. Saturn in Sagittarius will turn retrograde later in the month, in another slow-down for the decision making and political process. Jupiter and Saturn will meet in a square (conflicting) aspect around the 24th of March.  Then, policy (Saturn) conflicts (square aspect) with electorate power (Jupiter).

The current stellar configuration shows a strong Jupiter, in a position to benefit analytical thinking, repair of systemic institutions and, the democratic process itself. Uranus remains the wild card in Aries.  The actions of a strong personality (Uranus in Aries) could influence the direction of events, either for a positive or negative result. Mercury, as the ruler of Virgo, and therefore Jupiter’s dispositor, and in Aquarius, is disposed of by Uranus, in turn disposed of by Mars in Scorpio. Therefore, Mars is a final dispositor, being in his own sign, in Scorpio. Mars has a shared ambition here in Scorpio, and a view for transformation. Pluto in Capricorn, a co-ruler of Scorpio, is disposed of by Saturn in Sagittarius, Jupiter the dispositor. Jupiter, Uranus and Saturn remain the strength of the protagonists in today’s activities, while Mars in Scorpio might actually succeed to a greater extent, through commitment and the strength of reserve power. Mars moves into Sagittarius on the 6th of March, igniting the political platform, and will also enhance Jupiter’s power.

Wednesday March 2nd – Jupiter, as a major significator in today’s chart, could be summed up in the field of the electoral process as the polling of voters for public opinion and candidate choice. Virgo represents the persona of the common man/woman. It is their opinions which most matter in the democratic process. The candidate that wins will eventually hold the power, but for now, it is the people, not the office holders, that are in high profile. The Moon in Sagittarius today, transits Saturn, then forming a square (challenging) aspect to Jupiter and the opposing planets in Pisces. The pivotal role of Jupiter begins to break down the traditional political process, turning to unconventional candidates.  A woman candidate is unconventional in the role that was exclusively dominated by male candidates. A candidate without political of governmental experience is also a maverick (Uranus) in the role of presidential contender. Other areas where we see the Jupiter and Uranus would be the entertainment field – the current Oscar Awards that were criticized as unfair – and the academic field, where unpredictable and tragic violence has erupted so often over the past year or so. The Moon trine to Uranus today could give unprecedented advantage (Moon) to the unconventional and the innovative (Uranus).

Thursday March 3rd – It is the process that Uranus represents that breaks down conventional roles and ideas, implementing the revolutionary.  However, the strong symbolism of Jupiter in Virgo, and in a pivotal position, with strength is that the democratic process is the vessel of the change taking place. The leading candidates have unconventional traits. Yet, the process is considered to be flawed.  The governmental and justice systems are viewed as broken. A top contender for high office must be a molder and a repairer, to repair the system and mold the future. Jupiter retrograde in Virgo is closing into an exact quincunx aspect (150 deg) with Uranus.  Combining the unconventional with the conventional is the trademark of the quincunx aspect. Venus in Aquarius is also a sexile (60 deg) aspect to Uranus, a workable and beneficial aspect that can help transform the highly charged Uranus, taming the bull, as it were. The Moon enters Capricorn to claim victory, for a calming effect and an expectation of achievement.

Friday March 4th – Momentum builds today, with the Moon sextile to the Sun in Pisces, and trine to Jupiter and conjunct Pluto in the earth signs. Capricorn is a sign of feminine power, and authority, also a parental sign, ruled by Saturn.  The Moon will also form a sextile aspect to Mars in Scorpio, giving due recognition to partnership, shared values and resources. Uranus in a square aspect to Pluto is controlled, its force is held and perhaps the more radical ventures are regulated and controlled. The Sun, in a square aspect to Saturn from Pisces, gains strength with the forming opposition to Jupiter and sextile to Pluto. The virtue of Pisces is that it is capable of absorbing an endless amount of emotion.

Saturday March 5th – As Mercury moves into Pisces today, there is a shift in the undercurrent of support.  Some contenders are likely eliminated, or gracefully resign their quest.  The Moon transits into Aquarius later in the day, as it forms a square aspect to Mars, as actions become more independent.  Strength through adaptation of power and ability become recognized. Mars is moving into Sagittarius, where a more focused ideology is developed. The Sun in a square aspect to Saturn represents the rejection of controls, as independent moves are more acceptable.

Sunday March 6th – Mercury in Pisces in a square aspect to Mars in Sagittarius shows a rejection of too rapid an advance or promotion idealistic goals.  The Sun square to Saturn from the same signs promotes a slower, more pragmatic approach to initiatives. There are yet roadblocks to ascendency to power.

Monday March 7th – The alignments taking place in the zodiac show the institution of democracy working together, as the electoral process funnels the candidates, promoted and backed by supporters, power figures, and their own experience, to stand for office in the polls. The leaders are set into motion in their campaigns.  The Moon moves into Pisces later in the day, to join with Mercury, Neptune, the Sun and Chiron as the New Moon eclipse will form in opposition to Jupiter on March 8th-9th. 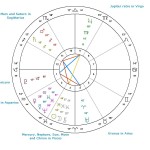 Tuesday March 8th – The polling results with the eclipse in Pisces opposed by Jupiter, seems to indicate that the unsurprising results shake the nation.  A new phase of the campaign is set in motion.  Power is more open to the will of the people worldwide. The choices now seem clearer. A successful democracy is a process where the population feels they are included and that their opinions will be heard. Saturn is progressing to a square aspect with Jupiter on the 23-24th  at the Full Moon eclipse. This could be a controlling effort by conventional forces, or court issues that have a consequence for the general elections in November.