The top performers in sports and entertainment, as well as political candidates have made their best show these past few weeks. Capricorn is still the power house, and the best of the best (in order to eliminate the not so top-notch) show us their stuff.

While Pisces is a repository of instability, it is through the school of hard knocks that determines who has integrated life’s lessons.  The Moon in Pisces tends to dissipate and collect emotional disabilities. What if, however, a natal Moon in Pisces is the handle of a natal chart’s bucket formation?  What if the entire life has collected emotionally and connected with the strength, not the disability of the sign?  The Sun now in Aquarius, gives personal identity of a universal nature, a collective of individuals with equal voices, such as in a democratic vote. Hillary Clinton has immense power and self-assurance. Yet her natal Pisces Moon would ordinarily be seen in a reclusive person. Furthermore, her natal chart shows three planets in Scorpio, including her Sun, and in the 12th house, using the 8:02 am birth time. Scorpio is on the Ascendant, so Pluto is a chart ruler. The planets in Capricorn are transiting her natal 2nd house, the house of personal values and creature comforts.  She is showing strength in matters of personal stability, financial success, and also in her appearance as one who is very accomplished. While the Uranus square Pluto aspect weakens, the Saturn trine Uranus aspect strengthens throughout the coming year. Saturn trine Uranus will be a focus on the revolutionary or outsider position, and could be a compromise or unifying factor for the new administration. More stability and continuity is preferred to radial change.

Wednesday February 10th – The Moon in Pisces draws us to reassess, to meditate on the issues at hand and possibly form new opinions.  Here we can get in touch with our instinctive self, as well as the collective power. The Sun in Aquarius and Moon in Pisces looks to the future and the collective power inherent in a social contract. The draw of the collective is powerful.  As individuals, we may be one of the many involved in bureaucratic (Pluto, Venus and Mercury in Capricorn) assimilation (Pisces).  This could include end of the year accounting, renewing licenses and official documents. The Moon in a trine aspect (easy 120 deg) to Mars in Scorpio makes this a highly charged, emotional time. The revolutionary fervor of Uranus in Aries is conflicted with establishment and traditional power (Pluto in Capricorn) giving voters a choice.  However, Uranus square (90 deg) to Pluto is a separating and therefore, weakening aspect. The close trine (120 deg) aspect between Venus and Jupiter retro in earth signs continues a streak of luck and beauty. Creative ventures are favored now.

Thursday February 11th – The Moon enters Aries today, as a new cycle is initiated, a change in status is certainly in the forecast. Mars, the dispositor of the Sun, is moving toward a sextile aspect (60 deg) with Jupiter. The goal to transform status, to challenge opponents and incorporate social technology is a working agenda. Saturn approaches a trine aspect to Uranus, as stability and experience calms the more revolutionary agendas or platforms.  The collected impressions impressed at the New Moon, brings a moderating message to the powerful will to transform through Uranus in Aries. Unifying appeal becomes a new imperative. Slow movers lapse behind in the race.

Friday February 12th – As the lunar transit becomes involved, the essence of the conflict between traditional government and radical change becomes exposed. Will there be an undermining of the revolution, or will it become more infused with power? At this point, the trine to Saturn has had an appeal, so there is perhaps a calming and less vigorous will to completely overthrow existing policy.  A modifying force is the more apparent result, in my view. The Moon transverses Uranus position in Aries, so conflicts could definitely be touched off now. The limiting effect of Saturn could make a more focused or limited, perhaps even prevent violence.

Saturday February 13th –Mercury at 29 deg Capricorn insists on proper form and punctuality. While the Moon in Taurus favors Venus (Venus rules Taurus), esthetics of beauty and form may win out. Mars in Scorpio sextile to Jupiter in Virgo increases the power of the voice for reform (Pluto is the dispositor of Mars) within the traditional power, or transcending that power center. This focus seems to be on reform rather than abrupt change in policy. 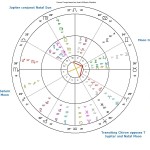 Sunday February 14th – Bernie Sanders’ natal Sun is a 15 deg Virgo will be directly affected by a Jupiter transit beginning in mid-March. However natal Mars at 23 deg Aries will be activated throughout the summer with the transiting Uranus, a planet that affects generations and motivates revolution. His quest for high office is certainly going to have a lasting impact on the nation. With Mercury joining the Sun in Aquarius today, the concept of a more radical approach to social change is under examination. Jupiter in Virgo is disposited by Mercury, although currently in a retrograde phase, it will slow and reverse course in May. Sander’s natal Sun in Virgo is also disposited by Mercury, and his discussion is central to the theme. Elements of social change are integrated (Jupiter) into the Democratic Party’s platform.

Monday February 15th – The Moon leaves Taurus in the afternoon today and the 1st quarter Moon phase, to spend two and a half days in Gemini, also ruled by Mercury. The developing crisis becomes clear now. Differences of opinion divide families and generations. A trine from the Moon to Pluto awakens latent bias and preferences. A grand trine is formed in earth signs early in the day, as hopes for leading candidates increase.  Celebrations along generational divides are likely.  A more consequential goal remains yet ahead, as a grand cross formation now, and then the full Moon phase with an eclipse on the 22nd of February.

Tuesday February 16th – As the opposition between Jupiter and Chiron comes closer today, emerging issues such as healing and wisdom of experience, are juxtaposed to traditional policies in law enforcement and education. Saturn in Sagittarius, Jupiter’s sign of rulership, and thus, the inclination to search for answers to social problems is central to leadership in future government policies. Government in a democracy must heed the will of the people to initiate reforms.