The fourth quarter of the lunar cycle gets underway, as the Moon in Taurus is square to the Sun in Leo. Here we can see a conflict of values with the romantic appeal of power before us. Throughout the transit of Taurus and into Gemini, the Moon reflects personal values that are concentrated on, evaluated and perhaps changed by events. Individuals, on a personal level, are concerned with finances and health, especially if they have a strong Taurus or second house location of significant planets in their natal charts. While there is a trine aspect to Pluto and a square to Venus as well, there can be complications, such as reversals. There is motivation to join with group activity, taking part in election campaigns, for example.

Wednesday July 27th – A breakthrough announcement could make a radical change in social or political fortunes, early in the day or possibly yesterday. Power is certainly a focus, as Pluto is trine (easy aspect) to the Moon. The sextile aspect to Neptune can add mystery and lack of clarity or inspiration to overcome obstacles. The strong Uranus position in Aries as violence surfaces throughout the world, an eroding situation for migrants and economic disparities are combined to create populations of the oppressed and desperate. With Mercury in Leo (fixed fire sign), the groundbreaking announcement (Uranus in Aries) is as hopeful as it is powerful.  Status as a philosophical position is on the decline (Saturn in Sag retro), as basic values, a material need basis (Moon in Taurus) of the majority (Pluto in Capricorn), seems to climb (trine aspect in earth signs). 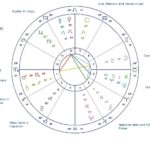 Thursday July 28th – A process of transformation is underway. Mars in Scorpio, however, is opposed by the Taurus Moon today, with Mercury at the focal point in Leo. Messages to quell the discord in direction, a potential rebellion, succeed only to an extent, as power is unified (Sun, Mercury and Venus in Leo).  Jupiter in Virgo, as a voice of the underdog element, is disconnected, no longer in aspect with Neptune, and lacking other major connections. The Sun in its sign of rulership (Leo) is strong and is the dispositor of Mercury and Venus.  The success of a rebellion is unlikely. The Moon enters Gemini late in the day, as communication efforts increase.

Friday July 29th – The Moon’s opposition to Saturn is an opportunity to open discussion for hold-out positions. With Neptune in Pisces at the focal point of this opposition erosion (Neptune in Pisces) of support (Saturn) seems at stake. Venus and Jupiter (ambience and charisma) in a close semi–sextile (30 deg favorable minor aspect) could be a bridge for agreement. Power (Leo) and practical measures (Virgo) combine. However, a more aggressive approach (Mercury square aspect to Mars) is likely now.

Saturday July 30th – The Moon’s transit of the 3rd decant of Gemini is at the focal point of Jupiter opposed to Chiron. The inclusive power (Jupiter) of a wounded healer (Chiron) is brought to bear on the stage (Sun in Leo).  The power of drama is maintained, while Mercury transits into Virgo voicing more practical measures. The Moon’s transit from Gemini to Cancer could help heal wounds as well, as more aggressive actions lead to a creative alliance with recessive elements (Moon quincunx Saturn).

Sunday July 31st– The Sun in Leo is in a trine aspect with Saturn today, as disagreements are smoothed over. The Moon’s trine to Neptune also inspires a transformative spirit. Venus in a trine aspect to Uranus (both in fire signs) indicates an explosion of creative expression, as a more exalted level is sought. Mercury is trine to Ceres, as a more inclusive social umbrella proposes relief for many.  How to maintain positive feelings is the key to the good life.

Monday August 1st – Unusual alliances or match-making efforts are underway. Venus in Leo is trine Uranus in Aries and quincunx to Chiron in Pisces. Appealing to efforts to heal and unify ranks, more erratic or revolutionary promises can be proposed today.  The political standards (Saturn in Sag) gain followers with Sun in Leo trine to Saturn.

Tuesday August 2nd – The New Moon in Leo this afternoon (US times), evening in London, Europe, the Middle East, and also points eastward, aligns with a proposal for more regal leadership. It is regal in the sense of being granted a wider or more profound reign over resources and population. A celebratory mood sets in. Mars enters the fire sign of Sagittarius, making a total of four planets plus the two luminaries in fire signs. Forward moving, progressive energy is favored.

Hope you have a great week!