Hillary- The transits on the day of the 1st debate are challenging, but show some advantage for Ms. Clinton. The date is exactly one month from Hillary’s solar return (birthday). This is a slightly favorable semi-sextile aspect to the Jupiter and Sun conjunction in Libra. 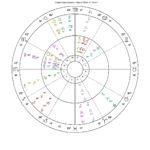 Donald – With Neptune transiting his natal 10th house, victory is probably denied from the off-set. He is definitely at a loss and over his head in the contest. 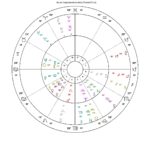 The many aspects in Hillary’s favor, as well as her known abilities and studious preparation, give her an edge in the debate. While Donald will try to turn the situation in his favor through charm and self projection, he is unlikely to succeed to a very great extent. The aspects of the transits of the evening do not give him any advantage, and seem to favor Hillary in the outcome of the debate.