With Venus in Sagittarius as of this week, and until Nov 13, well beyond polling dates, the attempts to smooth the way could succeed, both at home and internationally. Venus loves peace and harmony, while Sagittarius aims at promoting political and philosophical viewpoints, often to the battlefield. Here we are less personal, more concerned with symbolical and historical impact. We are drawn to a candidate for a reason beyond personality and personal gain. Stamina is not a medical diagnosis, either. Trump hits low and gets his cues from an outdated playbook.  The fallacious elements in his posture and common language talk stand out in highlight. The voter is now more inclined to refer to expert opinion on the matters that are, to say the least, confusing.

Wednesday October 19th – The Moon in Gemini opposes Saturn in Sag today, presenting a challenge to work out form and substance. Mars is conjunct Pluto in Capricorn, culminating this aspect of a challenge to power or official sanction. Both planets are disposed of by Saturn in Sagittarius, as the political status is all important. Jupiter in Libra disposes of Saturn, giving the poll outcome the final victory. Danger does lie in attacking the system, and for all it’s worth, the participants need to accept the rules or not play the game. Mercury and the Sun are also in Libra, as issues are discussed and evaluated (Sun), analyzed (Mercury) and balanced (Libra). Mercury is approaching the opposition (180 deg aspect) to Uranus, so that issues are brought to a decisive point. A quincunx aspect (150deg) between Jupiter and Neptune is forming, giving urgency to the underlying needs of community and especially the victims of disasters or crime. The impact of the 2-3 day time frame now is of universal and epoch forming importance with the outer trans-Saturnian planets at crucial points in aspect. 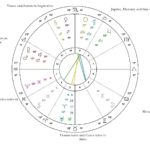 Thursday October 20th – Pressure from the contested political contests gives way to overt conflict in some cases. While Mars has transcended the point of conjunction with Pluto, an aspect that results in applying pressure, discourse becomes more hostile with the Mercury opposition to Uranus reaching parity. The Moon trine Mercury and the Sun opens channels and helps to ease the pressure that has built up.  As Jupiter is a final dispositor of the planets in Sagittarius, and in mutual reception with Venus in Jupiter’s sign, the victory for democracy can be achieved if harmony is maintained. The threat of a global revolt is one that leads to chaos, and therefore unacceptable. Mercury in Libra quincunx Chiron in Pisces defers to the inner wisdom of the wounded healer.

Friday October 21st – The Moon in Cancer today is trine (120 deg) aspect to Neptune in Pisces as we are made aware of more casualties of war and natural disasters.  The opposition of the Moon to Pluto and Mars could compel as well as repel our instincts, as we feel powerless to intervene. The square aspect (90 deg) from the Moon to Jupiter, keeps us at odds, as we try to balance personal and social demands. There is inherently a total lack of balance.  The Moon quincunx Saturn in Sag as a more rigid approach to world conflict is put to the test.

Saturday October 22nd – The Cancer Moon square to Uranus in Aries, as conflict avoidance is a means of self-protection (Cancer the lunar sign equates defensiveness). As the square aspect to Mercury and the Sun follow, rationalization and power overcome action in the economic or social forums. The third quarter Moon denotes a conflict in dissolution, as more structures are breaking down under the stress.  Later in the day, the Sun ingress to Scorpio takes place, as conflicts retreat to interpersonal psychology and a more emotionally based decision process.

Sunday October 23rd – With the Moon in Leo, trine (120 deg) to Venus and Saturn in Sag and sextile (60 deg) to Jupiter in Libra, more contentment is in the air. The die may be cast and the colors set in, red or blue – each has a goal to reach for.  Entrepreneurial power is at a height with Mars in Saturn dispositor of Uranus in Aries. Building on inflated hope is a recipe for disaster. Maybe we all partake of this to a degree. Some will certainly win out.  A quincunx aspect to Neptune in Pisces from the Moon, although a fleeting feeling of uncertainty, could also trigger a decline. Some risk must be taken, however making sure that your prospects have validity is important.

Monday October 24th – Mercury in the last degree of Libra represents a final attempt to promote a resolution, to gain a just solution or balance a process.  The Moon in Leo is trine to Uranus, as transforming goals is made possible, with unexpected speed in delivery.  Generosity of spirit precedes kindness in action as Venus in Sag promotes political goals.

Tuesday October 25th – The Moon in Virgo finds rewards for the steadfast Venus and Sun in Scorpio, although may not be so inclined towards the higher minded political theorists. What feels right is what is likely to be most important rather than what the imaginary or possible outcome drawn in the sand might be. Generosity and kindness go a long way to promote charitable work (Jupiter quincunx Neptune in Pisces).