With Venus, the planet of a powerful woman, in opposition aspect to the extraordinary powerful and iconoclastic Uranus, women everywhere experience an uplifting power, a challenge and potential break-through in areas that they were formerly held back. Trail blazers lead the way, as always. The powerful storm heading to the US east coast is a more mundane instance of the Venus and Uranus in opposition. Residents as warned to be prepared, to evacuate (Uranus) or to stand their ground (emboldened Venus). Advanced tracking and warning systems, evacuation routes allow for instant evaluations of the situation on the ground. Uranus can indicate danger and an independent choice.  With Mars transit into Aquarius, goal orientation (associated with male dominance) becomes coalesced into the opposition as Uranus (iconoclast) is the dispositor of Mars.

Wednesday September 12th – The Venus opposition aspect (180 deg, tense) to Uranus is strong today, as unified powers answer to the radical elements. There could be open battles and Mars in Aquarius moves to strengthen the square aspects, and finally evolving the position of personhood to where there is a balance between desire and recognition of responsibility and respect. Let us have the respect to act responsibly and evolve as individuals (from on Sep 4th post). Venus opposition aspect to Uranus brings these issues out into the open. As the Moon in Scorpio will transit Venus late on Wednesday (US times zones), choice, for those in the path of Hurricane Florence, can the gamble of a lifetime. With Saturn’s aspect to both Venus (sextile) and Uranus (trine) the effect of this storm could be deeper and more tragic, although perhaps less chaotic than expected due to precaution and advanced warnings.  Mercury in Virgo approaching an opposition aspect to Neptune in Pisces could offer some support for tragic loss and relief to those who suffer.  Ceres in Libra is in a square aspect (90 deg, harsh) to Saturn as suffering and loss of property value and agricultural productivity takes a toll.

Thursday September 13th – The scenario from Wednesday continues, even more intensely, as Venus opposition aspect (180 deg, tense) to Uranus decreases in strength, Mercury opposition to Neptune increases. Insecurity and instability produce emotional responses (Pisces). The Moon in Scorpio is sextile aspect (60 deg, friendly) to Mercury and trine aspect (120 deg, flowing) to Neptune, as communication efforts to raise support for victims of storms and earthquakes are empowered. The Moon forms a sextile aspect to Pluto and then transits Jupiter in Scorpio, for abundance of unified effort. The Moon is then in a sextile aspect to the Sun in Virgo, to help implement support and produce success in most efforts. The Moon enters Sagittarius (the Archer) late in the day as relief efforts hit the mark.

Friday September 14th –  Mars in Aquarius is in a sextile aspect (60 deg, friendly) to Chiron in Aries, as the voice of wisdom or the hero form the past, makes a significant impression. The power of this impression is tested as Mars plies to a square aspect (90 deg, harsh) with Uranus. It is in the final analysis a test form democratic reform. Individual concerns for security for life and for the lives of their children are basic. Uranus in Taurus addresses universal concerns about the distribution of wealth.

Saturday September 15th –  Mercury in Virgo makes a trine aspect (120 deg flowing) to Pluto retrograde in Capricorn today, as power centers (Pluto) undergo internal (retrograde effect) reorganization (Capricorn) are under critical (Virgo) analysis (Mercury). Mercury is in a sign of rulership in Virgo, therefore is in its strength.  The Moon in Sagittarius, disposed of by Jupiter in Scorpio, advocates for a transformation.  Mars in Aquarius with a square aspect (90 deg, harsh) forming to Uranus (retro) in Taurus as efforts to revolutionize basic distribution of resources (Taurus) gain momentum. 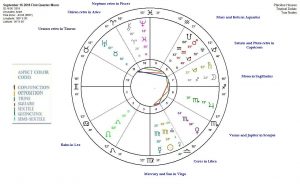 Sunday September 16th – The Moon in Sagittarius is in a square aspect (90 deg, sharp) to Mercury in Virgo today, as analysis is more particularized and itemized. The sediment that is formed is the nitty-gritty, the outcome of a collective response to publications. The everyman (Virgo) reaction to the media and expert opinion is critical at this first-quarter Moon phase. Mercury is the dispositor of the Sun and Mercury in Virgo and in a sextile aspect (60 deg, helpful) to Jupiter in Scorpio.  Jupiter is Scorpio is disposed of by Pluto in Cap, Pluto is disposed of by Saturn, a final dispositor. Mercury in its sign of rulership Virgo, and Saturn are both final dispositors.  Neptune in Pisces (the sign of rulership) is the third final dispositor of the configuration at this quarter Moon phase. Here we make choices as the lunar phases continues to develop new awareness and possibility.

Monday September 17th – The Moon ingress to Capricorn today in a square aspect (90 deg, harsh) to Chiron in Aries and with a trine aspect (120 deg, flowing) to Uranus in Taurus, seeks to address the inequalities of resources, although the proposals are limited, as the Moon is conjunct (0 deg, combining) to Saturn. While effort to qualm discontent may be successful for the time being, The wounded warrior (Chiron) voices the need for a more comprehensive makeover. Mars in Aquarius activates that discontent. Saturn (limitations), Mercury (citizen-voters) and Neptune (social decay) are more powerful indicators of promoters of change.

Tuesday September 18th – The Lunar transit in Capricorn is sextile aspect (60 deg, helpful) to Neptune in Pisces early in the day, as universal empathy to awakens greater concern. A conjunction (0 deg, aspect) with Pluto in Cap follows, empowering the will for transformation. A sextile aspect to Jupiter from the Moon and Pluto, creates a more magnified undercurrent for transformation. As a new day begins, a trine aspect (120 deg, flowing) to Mercury and the Sun in Virgo bring the issues powerfully into the open.

Thanks for reading my forecast. Have a most successful week.