The Sun ingress to Sagittarius at the Full Moon, bringing issues of the cycle into full view. There are now, with Jupiter in Sag, Venus in Libra, Saturn in Cap and Neptune in Pisces four planets that are final dipositors!  There are multiple outcomes. Saturn and Neptune are in their own signs of Capricorn and Pisces, and are considered malefic in effect. Jupiter and Venus, the greater and lesser beneficent planets (so called) are in their own signs of Sagittarius and Libra. The destructive forces are in some measure balanced by the power of human spirit and beneficence.  The tremendous loss suffered is only equal to the harmony and community spirit that revives hope among the survivors. The tragic events are followed by a revival of human empathy, and resourcefulness that leads to a regeneration of community from the darkest moments. This is a late wake-up call on the snooze alarm for climate and environmental management. Warnings of more frequent hurricanes, rising sea levels, not even to bring into the dispute the theory of global warming, but dealing with symptoms, -the ground management- as preparation for confronting simultaneous crises, becomes relevant. Manufactured crises emanating from the Oval Office need to be curtailed. The Full Moon is the mirror of Trump’s natal Full Moon chart, and serves as an antidote. There are multiple outcomes with this season’s astrological arrangement, and multiple issues that need to be attended on multiple levels. In a very simplified view the malefics (Saturn and Neptune) create hardship and disorder, while the benefics (Jupiter and Venus) bring abundance and balance. Where is the mismanagement of resources and technology?  Bringing our scientific knowledge and technical resources (Jupiter) to the real emergencies (Neptune), and addressing the actual threats to national interests (Saturn) should be the highest priority of government in order to restore balance (Venus) in this era. Mars in Pisces is at the focal point of the T-square at the Full Moon.  More disaster portends as the basis of democracy is threatened.

Wednesday November 21st – The Moon in Taurus compliments Saturn in Capricorn with an earth sign trine aspect (120 deg, easy).  Compliance (Moon) with the process comes into focus (Saturn).  Instincts of survival regarding health and food necessities are involved.  A quincunx aspect to Mercury retrograde in Sagittarius from the Moon in Taurus makes communication unreliable. Mercury is disposed of by Jupiter, a final dispositor in Sag, only to magnify the effective issues caused by the faulty or inadequate communication system.  Jupiter in a square aspect (90 deg, harsh) to Mars shows increased frustration as problems multiply. 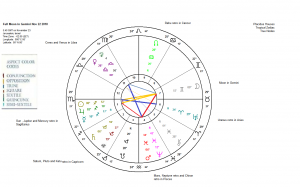 Thursday November 22nd – The Sun ingress to Sagittarius and the Moon trine aspect (120 deg, easy) to Pluto early in the day seem to regenerate power (Pluto in Cap) and assist in the wider distribution of resources (Sun in Sag), at least in theory. The Full Moon opposition aspect (180 deg, tense), as the Moon ingress to Gemini occurs later in the day (US time zones), brings out the full force of the issues of political theory (Sagittarius) and their applications (Gemini). The Moon is also in an opposition aspect to Jupiter in Sag and square aspect (90 deg, harsh) to Mars in Pisces, forming a T-square configuration (see image). Increased environmental concerns with possible dangers accompanying the primary impact on environment are likely.  Ceres in Libra is quincunx aspect (150 deg, complex) to Mars in Pisces, as the rescue of children and providing for agriculture in stricken areas to replenish food supplies becomes vital.

Friday November 23rd – The Moon is in Gemini and in an opposition aspect (180 deg, tense) to Mercury retro in Sagittarius. Efforts at communication may be blocked. Uranus at 29 deg in Aries is disposed of by Mars in Pisces, indicating problems with social media and Internet communication. Ceres at four degrees Scorpio is in a trine aspect (120 deg, easy) to Mars in Pisces. While a trine aspect is generally considered favorable, it can have its negative impact, especially when it involves the Planet Mars. The water signs Scorpio and Pisces also imply danger with Mars penetrating the surface of survival capacity in Pisces, epidemics could be one result, endangering the lives of children. With 10s of thousands of homeless families in the areas afflicted by fire this month, contagious disease could spread rapidly.

Saturday November 24th – The Moon in Gemini forms a strategic quincunx aspect (150 deg, complex) to Pluto in Capricorn. Creative measures taken could prevent massive death and disease.  The Sun in Sagittarius is conjunct (0 deg, aspect of combination) to Jupiter, as a greater distribution of goods and relief arrives. The Moon trine aspect (120 deg, easy) to Venus in Libra later in the day brings a measure of tranquility to the distraught victims of natural disasters, or of violent incidents.

Sunday November 25th – The Moon in Cancer is in a quincunx aspect (150 deg, complex) to the Sun and Jupiter in Sagittarius. This could represent difficulties in supply and distribution of commodities. The Moon in a trine aspect to Mars following the bottlenecks encountered could help with a faster resolution of difficulties. Mars is in a sextile aspect (60 deg, friendly) to Saturn in Capricorn, for greater coordination, or actual limits on supplies as Saturn also is in an opposition aspect (180 deg, tense) to the Moon, although the square aspect (90 deg, harsh) from Mercury retro to Mars indicates that the demand increases dramatically.

Monday November 26th – The Sun transcends Jupiter in Sagittarius, and doubly approaches a conjunction aspect (0 deg, combining) with Mercury retro. The Moon in Cancer is in an opposition aspect (180 deg, tense) to Pluto before mid-day in the US, as oppressive conditions create emergency services and epidemic health concerns. Venus in Libra is doubly approaching the opposition aspect to Uranus in Aries and forming a square aspect (90 deg, harsh) to the lunar nodes (Ketu and Rahu), as frustrations and tensions mount.  The Mars-Saturn sextile (60 deg, friendly) intensifies as well, as survival skills are helping many to cope with the emergency.

Tuesday November 27th – Mercury retro doubly approaching Jupiter for a close conjunction aspect (0 deg, combining) increases communication efforts and could also magnify problems with communication services. However, the Moon trine aspect (120 deg, easy) to the pair plus the Sun in Sag could be a more creative and enjoyable influence. Luck is increasing in all manner of communication. Dramatic productions are in demand, as entertainers abound.  Venus in Libra doubly approaching the opposition aspect (180 deg, tense) to Uranus retro in Aries, can also become a dramatic and climatic display.