The mid-winter days are indeed Capricornian in nature. Although the southern hemisphere has long daylight, the severity of the summer might also prompt the mountain goat climbing for higher ground. Wherever your location, Capricorn gives strength and resolve. You may take on new roles in life or resolve to take a new direction. Eliminating habits where are non-productive and cultivating more desirable personal behaviors Organization is another trait that Capricorn is noted for. Good habits and watchfulness allow that mountain goat to climb higher. Building a life, a home or a relationship takes care and resolve. Capricorn takes a direction and is not easily turned aside. However, with Pluto in Capricorn this year, there is a deeper issue to resolve. There is a regenerative force in Pluto that not only destroys but rebuilds. It is this transformation that we look for this year in January, with Sun, Saturn and Pluto in Capricorn. Saturn, the planetary ruler of the sign Capricorn, is in its strength here. Saturn deepens resolve while Pluto promotes transformative actions. This year we will see significant changes relating to government policies, and on a personal level in career or status.

Wednesday January 2nd – The Sun conjunct (0 deg, combining) aspect to Saturn continues today, as resolutions for the year help us focus on implementing goals. The Moon is in Sagittarius and trine aspect (120 deg, easy) to Mars in Aries early in the day for direct action. Fortunately, the Saturn –Sun influence keeps most of us stabilized. The Mars contact with the Moon none-the-less gives assertiveness and eagerness to follow the chosen path. The Moon moves to semi–sectile aspect (30 deg, mildly activating) and then a conjunction with Jupiter. Jupiter is in its own sign and along with Saturn and Neptune and is a final dispositor of today’s chart. As we are hopeful to integrate our new resolve into working reality, Jupiter will help transform our dreams into reality.

Thursday January 3rd – Mercury in Sagittarius continues in a trine aspect (120 deg, flowing) to Uranus retrograde in Aries.  Mercury is a trigger for action, primarily with a philosophical basis in Sagittarius. True believers may want to revolutionize (Uranus) their message. Revolutionary ideals may be acted upon today. Astrology (ruled by Uranus) gains in a wider acceptance. With the Moon in a square aspect (90 deg, sharp) to Neptune, matters of occult or mysticism gain in popularity. People want to understand what they can expect for the coming year in personal life and from the powers that govern the world. Mercury in a square aspect to Chiron in Pisces helps to connect to the inner guide for the search for truth. Inspiration follows as Jupiter moves to a square aspect with Neptune over the coming days.

Friday January 4th – The Sun in Capricorn is in a sextile aspect (60 deg, friendly) to Neptune in Pisces, as the plight of migrants and families becomes more understood. Medical healing as well as psychological issues take center stage.   New life-saving techniques could be implemented over the next few days, as Neptune receives a square aspect from Jupiter. Mercury in Sag is also square aspect to Chiron in Pisces giving more guidance and wisdom for healing. Both the Moon and Mercury ingress Capricorn late in the day, forming a stellium of 5 planets in the sign of Capricorn. Matters of factual inaccuracies can be exposed or cleared up.

Saturday January 5th –  The Stellium in Capricorn is a major configuration of 5 planets in the same sign. The Moon conjunct Saturn (0 deg, combining) aspect as preparations are made for a new session of Congress in the US and the New Moon partial eclipse takes place late in the evening US times at 15 degrees of Capricorn. This is a strongly significant of change at the highest levels of government. This can happen internationally. Power is regenerate or transformed. The Saturn-Pluto conjunction that will become partile in January 2020 would be the implementation of that transformation. Venus is in a quincunx aspect (150 deg, complex) to Uranus in the eclipse chart. Psychological issues have the potential to overwhelm rational judgment (Capricorn) as new procedures are put in place (New Moon). 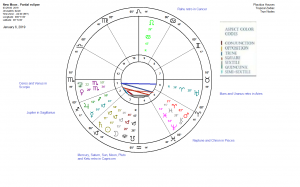 Sunday January 6th – The Moon in Capricorn transits Pluto (0 deg, conjunction) early in the day (US times) or afternoon (European time zones) as a renewal and transformation takes form. A change in legitimate rulership is likely as old concepts are rejected. New leadership forges a path ahead. While discontent (Venus quincunx to Uranus) is expressed, a transition of power becomes all but certain. Jupiter in a square aspect to Neptune strengthens in ability to include the discontented, integrating the oppressed into reformed political ideals. The Moon square aspect to Uranus overnight brings another jolt, whether actual earthquake or political or both.

Monday January 7th – The Moon in Aquarius is sextile aspect (60 deg, friendly) to Mars in Aries, as we work to initiate (Aries) far-sighted (Aquarius) programs. The future is now in the developmental stage. Venus ingress to Sagittarius as the lawmakers meet to initiate a new agenda. Mercury in a square aspect (90 deg, harsh) to Mars in Aries as communication overcomes initial disagreements. Jupiter square aspect to Neptune continues to expand comprehensive relevance. Conflicts can be resolved with patience, and be absorbed into the whole.

Tuesday January 8th – The Moon in Aquarius is in a sextile aspect (60 deg, helpful) to Jupiter in Sag in the earlier hours of the day, as Neptune conflicting with Jupiter (90 deg, square aspect) could undermine progress. Mercury in a square aspect to Mars uses innovation to overcome difficulties. The Sun approaches a conjunction aspect (0 deg, combining) with Pluto, with a possible disclosure of secret activities. Power centers are exposed as being either for or against human welfare. The Jupiter–Neptune square aspect continues to expose dubious alliances (Neptune) and actions in the media (Jupiter in Sag).