With the waxing Moon past the 1st quarter crisis, we see not only monstrous storms producing devastating havoc, but a US Supreme Court nominee, who was almost certain to be confirmed, suddenly has his appointment in question. The Full Moon on the 25th opposes the Sun in Libra (Balance) and the Moon in Aries (initiation). The Moon moves through the universal signs of Capricorn, Aquarius and Pisces and into the most personal sign, Aries. The Full Moon is the apex or the culmination of cycle, and brings about results. The destruction wrought becomes clear, its cost of life and property assigned. We are likely also to see the end of the investigation with results made clear with a Congressional vote. The Sun ingress to Libra -the Fall Equinox- is on the 23rd of September (GMT) and the afternoon of the 22nd in the US.  In Libra, the judgement must be balanced to satisfy the Cardinal – Air sign motif.  If off-balance, there is a continuous redress for seeking a balance. This nomination becomes very questionable. The lunar transit of Saturn in Capricorn on the 17th indicates a stalling of procedure, while the transit of Pluto (18th-19th of September) could initiate the upheaval and rejection of the nominee, questioning his fitness for the high court. Leaders in other nations may also be affected, essentially facing harsh criticism or a downturn of support. Transformation (Pluto) is underway to affect the governing offices (Capricorn).

Wednesday September 19th – The Moon in Capricorn today is in a trine aspect (120 deg, flowing) to the Sun and Mercury in Virgo. The current issues are debated (Mercury and Sun) with persuasive (trine) impact on receptive allies (Moon) in power (Capricorn). The momentum of resent sweeping change cannot leave this stone unturned. Saturn in Capricorn (status quo) has moved forward from the trine (flowing) with Uranus in Taurus (revolution) but the aspect sill is effective with less than a degree of the orb of aspect. While the aspect has weakened, it is still effective.  The power to remove a candidate is persuasive. The Moon will ingress Aquarius square aspect (90 deg, harsh) and conjunct aspect (0 deg. Combining) to Mars before the day’s end.  Mars and Uranus are activated by the Moon. A demand for change (Mars–Moon) and reversals (Uranus) is prevalent.

Thursday September 20th – The lunar transit of Ketu early today could bring a surprise, possibly a withdrawal of nomination is underway as the Moon is then in a square aspect (90 deg, harsh) to Venus in Scorpio. This could potentially disarray the establishment as Mars square aspect to Uranus in Taurus could disperse the effect of Saturn in Cap (administration) trine (120 deg, easy) to Uranus in Taurus (transformation).  Mercury is in a close conjunction (0 deg, combining) with the Sun in Virgo, disposed of by Mercury. Mercury (communication) is powerful in its sign of rulership Virgo. Uranus in Taurus is disposed of by Venus (the ruler of Taurus) now transiting Scorpio, disposed of by Pluto in Cap, and the final dispositor is Saturn in Capricorn. While Saturn is not afflicted today, power could be forced to reverse course.

Friday September 21st – The havoc that was created by Hurricane Florence is a reminder of the poor attention given to the residents of Puerto Rico during and aftermath of Hurricane Maria.  As Mercury transgresses the Sun in Virgo, lessons learned can be put to use. Virgo will criticize and make comparisons. As the Moon in Aquarius makes a square aspect (90 deg, harsh) to Jupiter in Scorpio today, victims tell their experiences. Deeply held secrets are finally revealed. Mercury ingress to Libra to work on resolutions, sorting what is worth saving from the destruction around.

Saturday September 22nd – As the Moon ingress to Pisces today, and in a sextile aspect (60 deg, working) to Uranus, letting go of the past was never more imperative. Emergency work is required to repair and move on into the future.  With Mercury in Libra, and the Sun soon to follow, the recovery could be very soon. The Sun at 29 degrees Virgo is a sensitive degree, so care should be taken with regards to health and safety. Mars and Ketu are approaching a conjunction aspect, as issues from the past could hold you back. Mercury in an opposition aspect (180 deg, tension) to Chiron retro in Aries is an opportunity for guidance. Listen for the voice of wisdom. It could be your past experience that speaks from within your subconscious as the Fall Equinox is reached. 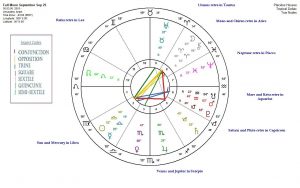 Sunday September 23rd – The Moon transits Neptune for releasing sorrows and realigning dreams with the future possibilities. Balance your intuition and will as the Moon ingress to Aries for the Full Moon opposition aspect (180 deg, balance) to the Sun. The day seems relatively peaceful – as rescue work is well underway.  Mercury quincunx aspect (150 deg, problematic) to Uranus and in a square aspect (90 deg, conflict) to Saturn could help inform us of the difficulties that lie ahead.

Monday September 24th – The Moon trine aspect (120 deg, easy) to Mars early in the day helps to make good connections. The Sun in a quincunx aspect (150 deg, complex) to Uranus as you may need to overcome anxiety by practicing calmness and meditation.

Tuesday September 25th – The Sun square aspect (90 deg, harsh) to Saturn today conflicts with authority or job-related issues that are difficult to overcome.  The Moon in opposition aspect (180 deg, tension) to Mercury allows for discussions and possible resolving of controversy.