The week ahead portends to be very intense, as the Moon transits Capricorn, meeting Saturn and Pluto, then into Aquarius, where Mars is moving retrograde. The Moon–Mars conjunction could stir up more provocative actions and reactions, followed by the Full Moon eclipse on the 27th.  The Sun at 4 deg Leo at the time of the eclipse, is in a square aspect to Uranus in Taurus, with a T-square formation that includes the Mars–Moon conjunction in Aquarius.  At the New Moon of this cycle, President Trump’s dramatic meeting with NATO leaders brought much criticism. Now at the Full Moon, we can anticipate more actions of a provocative nature. Venus is in a trine aspect to Pluto at the Full Moon, while Saturn is in a trine aspect to Uranus, possibly helping to calm the harsher impact of the eclipse and the actors who promote radical actions. Slower moving planets, especially in aspect to one another, remain in effect for days. The effect could also be experienced a day or more prior to the exact aspect formation.

Wednesday July 25th – This is a day to make solid progress in organizing work details, as the use of technical assistance is available, making repairs or doing evaluations. Uranus is in a trine aspect (120 deg, easy) to Saturn in Capricorn as a higher standard is applied to organizational policy. Venus in Virgo is in an opposition aspect (180 deg, tense) to Neptune in Pisces, applying remedies to the situation of migrants and homelessness. Venus is also the dispositor of Uranus, so that we could expect that Venus would represent the actors who have more innovative approaches to the problems of the migrants, able to help in the reunification of families in a more expedited fashion. Special skills and professional direction would be necessary in helping to overcome traumatic experience.

Thursday July 26th – The Sun in Leo is in an opposition aspect (180 deg, tense) to Mars in Aquarius today, while the Moon in in a conjunction with Pluto in Capricorn. Tense moments and possible power moves could be triggered by the Moon–Pluto contact. A crisis could develop into a full-blown emergency. Venus is trine aspect (120 deg, easy) to Pluto, possibly offering a way to defuse the situation. Saturn doubly approaching a trine aspect to Uranus adds more pressure to pare down the radical statements. 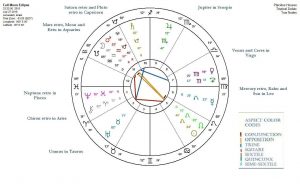 Friday July 27th – The Moon ingress Aquarius occurs early today, and forms a square aspect (90 deg, harsh) to Uranus in Taurus. As Uranus is the dispositor of the Moon in Aquarius, unorthodox methods are likely to be implemented. Individual initiative is rewarded at the Full Moon eclipse. Simultaneously, Mars retrograde in Aquarius is in an opposition aspect (180 deg, tense) to the Sun in Leo. Give and take is essential in this configuration, as power should be expressed to create a greater good for humanity. There could be technological advances, as well as economic benefits. Saturn in Capricorn is in a quincunx aspect (150 deg, creative) to the Sun, and trine aspect (120 deg, easy) to Uranus. The Moon is also in a sextile aspect (60 deg, friendly) to Chiron in Aries, applying the wisdom of experience. Venus and Pluto are doubly approaching a trine aspect (120 deg, flowing), when an easier regard for power that is expressed in a more sensitive mode, as the eclipse hour approaches.  Mercury in Leo turns retrograde. A review of recent initiatives could result in greater creative expressions. To integrate fully, objectives need to be internalized.

Saturday July 28th – With Saturn applying to the trine aspect (120 deg, flowing) to Uranus, the inventive and often erratic energy displayed through Uranus is expressed in a more controlled way. Now the power of organizations that can utilize and generate energy. Destructive forces of nature are also more under control now. Saturn continues to exert this influence through September of this year. However, Mars retrograde in Aquarius is applying to a square aspect (90 deg, harsh) to Uranus. This powerful contact tends to create havoc.  Mars was also conjunct the Sun at the eclipse, and energized by the eclipse degree.  The Mars square aspect to Uranus climax is August 2nd, although the influence continues for a few days.  We can expect intense and counter-active events over the next two weeks. Despite the fight or flight tendency, we should try to remain calm. The Moon in a square aspect to Jupiter today, is also quincunx (150 deg, creative) to Ceres and Venus in Virgo. Conflicts may arise; however, the outcome could prove beneficial. Clearing the air of negativity helps to heal emotional wounds.

Sunday July 29th – The Moon in Aquarius in opposition aspect (180 deg, tense) to Mercury retrograde today, drawing out possibly controversial opinions. Later in the day, or overnight US times, the Moon ingress to Pisces could help dissolve controversy, as it is then midway between Saturn and Uranus. With the T–square of Sun opposing Mars retro, and Uranus at the focal point, again triggered by the Moon in Pisces, opposing views could bring controversy and inflammatory rhetoric.

Monday July 30th – The Moon in Pisces passes over the quincunx aspect (150 deg, complex) to the Sun, as we strive to resolve difficult circumstances. Then the trine aspect (120 deg, flowing) to Jupiter brings emotional release. There is at last a sense of compassionate fulfillment of promises, as the Moon then is conjunction aspect (0 deg, combining) to Neptune retro, bringing the Jupiter trine to Neptune into effect as well.  Three semi-sextile aspects (30 deg, mild) help to reknit the internal architecture and provide some cohesiveness to the day.

Tuesday July 31st– The Moon in Pisces is sextile aspect (60 deg, friendly) to Pluto early in the day, then quincunx aspect (150 deg, complex) to Mercury retro in Leo and in opposition aspect (180 deg, tense) to Venus in Virgo.  The realization of generational dreams is delayed, while greater empathy is expressed for the plight of the migrants and displaced persons as work for reunification of families continues.