An incredibly interesting week astrologically, as the Sun moves into Aquarius on the 20th and with the Moon in Gemini a compatible air sign, association is strong with the luminaries.  However, the rest of the planets, except for Ceres, are in Earth, fire and water signs.  The question seems to be posed to our leaders and our cultural or social collective minds, is how to bring the intellectual ideas into reality.  How do we achieve the ideal, while working with the various institutions as well as individual needs, in our community?

Mercury retrograde meets Pluto in Capricorn, and opposing the Moon in Cancer on the 22nd. Pluto can galvanize through the opposition, although the water element signs are now working together. I see an opportunity to draw together on a realistic and stable platform to progress into the next era, to meet the demands of the time. The age of hypocrisy is over.  It is now the age of the technical error!

Wednesday January 20th – Many doubts arise, as the Moon in Gemini opposes Saturn, the established educational or philosophical or political centers are reflected.  We may feel there is a limited (Saturn) avenue for personal achievement (Moon). Then, the Sun enters Aquarius, the fixed air sign of the zodiac, and we excel in idealism and like-minded discussion (Aquarius) to advance our most progressive ideals.  The world is undergoing a transformation, as Mercury retrograde meets with Pluto in Capricorn, both disposed of by Saturn.  Effective transformation depends on the ability of the establishment (Capricorn and Saturn) to accept the flexibility of the Sagittarius mold, and reform the implementation of laws for the betterment of the world, through economic and social reform programs. Mars in Scorpio trine aspect to Neptune in Pisces, transforms the goals of social reform, and begins to dismantle repressive laws. Psychological blocks may also be dismantled through inspiration and spiritual study.

Thursday January 21st – The Moon now in Cancer, with a quincunx (150 deg) aspect to the Sun in Aquarius, we can reposition ourselves in view of all the change in the cultural stratosphere. Mercury retrograde serves to awaken change in bureaucratic institutions that have outmoded goals and strategies. Ceres in Aquarius is in a sextile (working or easy aspect) to Venus in Sag, promoting a more universal platform for political reform and justice.

Friday January 22nd – As Mercury retro transits Pluto, we get the full impact of this aspect. With the Moon in Cancer, in an opposition aspect to the pair, we can be blocked, to an extent, from the essence of the reform taking place, or actually deny its existence.  However, there is also the chance to draw benefit from the events and receive more protection.  The Grand Trine from Mars and Neptune to the Moon increases the effect of the lunar position, and the collective voice is heard. We are able to internalize some of the issues of a recent opinion and campaign for world leadership, and are able to take a position along with potential leaders.

Saturday January 23rd – While barriers are being broken, and personal views reformed, the Full Moon in Leo takes place this evening (in the US).  The Moon enters Leo, at 19:22 GMT (Between 11 am and 2 pm US times) and the Full Moon would be visible in the evening the exact aspect is reached at 01:47 GMT (on the 24th) or between 6 and 9 pm US times.  Enjoy the Moon light and romance, as the Leo Full Moon should be a conversation starter or maybe the perfect day for a wedding!  Israel time of the Full Moon is about 3:47 am on the 24th.  In the Full Moon chart, we notice that Venus has entered Capricorn, and Mercury retrograde is at the same degree as Pluto, 15 deg Capricorn, while having actually moved slightly past Pluto.  From our position on Earth, Venus and Mercury are now visible in the early morning before dawn (assuming a clear, cloudless sky), while Pluto is not visible with the naked eye.  The square aspect between Pluto–Mercury and Uranus is a one degree orb, and separating, although it can still can be processed by our human antennas throughout the week.

[Saturn is visible with the naked eye, although it is very faint.  The Moon and Jupiter will, of course be visible all night.  Thank you Cherie Lynn for the article on the 5 visible planets! The article explains when the planets are visible, until Feb 20th.   Hope to be able to see that!]

At this time, the Moon–Sun opposition could help us realize our greatest gifts, and help evolution by drawing us into a universal understanding. Meanwhile, Saturn, the dispositor of the 3 planets in Capricorn, is approaching a trine aspect with Uranus. This will be in effect over the next few weeks and will help to moderate some of the more erratic effects of unpredictable Uranus. However, the aspect will not be very strong until December 2016, as Saturn turns retro in March.  The jury will be out for some time. 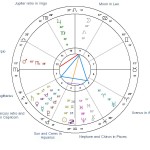 Sunday January 24th – The Full Moon in the early morning hours, followed by the Grand Trine is operating for most of the day in Israel, Europe and the UK. Inspiration, motivation, and enthusiasm, quickness of action are evident. The Moon in a square aspect to Mars pushes us on to accomplish our desired goals. A grand trine in fire signs is formed by the Moon trine Uranus and Saturn afternoon US time-zones, a time to enjoy but with some caution applied.

Monday January 25th – With Jupiter retro in Virgo, we can brush up on skills, and apply the gained understanding of trade to increase our position in employment or desired status.  The over-all situation remains fragile, however, with environmental issues and possible incidents of violence occurring in our nation and world. The Pluto square Uranus is a long lasting aspect, however, it will decrease in strength over the coming months. Mercury could trigger more action near the end of January or the first of February, after it turns direct and heads back to another conjunction with Pluto, igniting the square aspect to Uranus in the process.

Tuesday January 26th – The Moon ingress to Virgo gives five planets (including the luminary) in earth signs. Mercury turns direct motion, keeping in the orb of the 1 deg aspect of conjunction with Pluto.  Thus this influence will meld into the square aspect with Uranus in the days to come. For the time being, there is a sense of down to earth action, perhaps of preparation and expectation for the weeks ahead. The trine aspect to Venus from the Moon today should help us to feel secure and in the company of close friends. With a quincunx aspect between the luminaries, like-minded groups, political allies, enjoy a conversation that accepts a mix of opinion, and maybe a search for common ground. A happy birthday to my daughter Nadine!