While many observers were shocked at the latest Trump move to eliminate potential political rivals, the animosity between the two can be seen easily by looking at their natal charts. If Comey was fired to divert attention away from a possible investigation of dealings of the Trump Campaign and Russian interests, or simply because of the character conflict is less easily seen in the respective birth charts.

The two men, even based on appearance are quite unlikely matches. While Comey is tall and youthful in appearance, Trump is showing his age and rather rotund. While Trump with his famous stream of consciousness style, is forceful and abrupt, Comey is more measured and cautious, although he testifies with believable sincerity. Indeed the Sun in their respective birth charts are opposite one another. Other oppositions operate, as well as conjunctions between the planets in the two natal charts and at least one trine aspect.  Their characters are quite diametrically opposed one to the other. 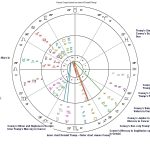 Trump’s natal Mars is conjunct Comey’s Uranus.  This may mean that Comey seems to be a threat to Trump, and to the direction of his goals. Coney may impede Trump in a radical way. The firing has not put an end to the animosity, as Trump seems afraid that Comey will  continue to act contrary to his interests. Trump’s natal Moon in Sagittarius at 21 deg is conjunct Comey’s natal Sun at 22 degrees. This is ripe for projection. Comey embodies Trump’s subconscious fears for an upset in his administration. Trump’s natal Moon is opposed to his Sun–Uranus conjunction and he is likely to expose his own flaws, the very involvement that could have him removed from his position as president. Trump does have it out for Comey. It is not simply an error or a “bad Job” on Comey’s part.  Comey embodies Trump’s subconscious fears.  There is a lack of trust between them. Each has a trine aspect from his Mercury to the other’s Neptune, showing that while they converse (Mercury) in a fluid manner (trine aspect), there is mistrust (Neptune) on both sides.

Saturn’s positions in the two charts are also opposed to one another. Trump’s Saturn in Cancer opposes Comey’s in Capricorn by 6 degrees. Certainly they have opposing world views, opposing goals and directions in government. Comey’s Saturn is exactly quincunx aspect to Trump’s natal Uranus so he is again under a seeming threat from Comey’s former office in the FBI.  Comey may still have the goods on him, but not the office to prosecute. Comey may still be instrumental in Trump’s downfall. Comey’s Saturn is exactly square aspect (harsh 90 deg) to Trump’s Jupiter, so the conflicts are severe. Comey has motivation to deflate Trump’s empire and largess. At least the animosity between the two is obvious.  Trump could learn a great deal from Comey while Comey could be enriched or conversely overwhelmed by Trump’s lack of legal support or balance in his display of wealth.

Calling Comey a “Showboat” and a “Grandstander” just emphasizes Trump’s lack of professionalism. While Comey could be in a sense was trying to serve two masters as he made his reasoning public in the congressional investigation. Trump wants his loyalty yet he must be loyal to the country first of all. His exposure of FBI processes is also unprecedented, as he admitted. He has made public what Trump wants us to ignore. With Jupiter and Saturn in Capricorn, Mercury in Sagittarius and Neptune in Scorpio, Comey became an object for Trump’s envy and embodied his fears.  With his natal Venus opposing Trump’s 12th house Pluto, Comey could in fact be an agent to undermine and implode Trump’s most unconscious, archetypal character flaws. On the other side, Trump has power over Comey’s position at the FBI. Distrust has turned to animosity as Trump is now fearful that Comey will expose his secrets. Trump’s move seemed rather impetuous, and now puts Comey outside his reach. We’ll see what happens.

As transiting Saturn is now retrograde and returns to station on Trump’s natal Moon degree (also transits Comey’s natal Saturn) we could see this conflict playing out in detail, starting in July 2017. Checks and balances are at work, as investigations carry on.

Your responses and or questions can be forwarded to me at comment@shoshananeshri.com

Check on the daily aspects posted here each week and on Facebook.