At the Full Moon, we all have a heightened awareness. Intuition is expanded and many individuals feel energized. This may affect mental health for some, while others enjoy rewards.  As the Sun enters Scorpio, this may even emphasize the sense of having achieved a mission or having received attention for problems that have persisted and will now begin to heal. The 8th House follows the 7th House of partnership. It therefore, as the 2nd house from the 7th, represents the shared resources of the partnership. This could be return on investments, retirement income, or community property of some sort. Scorpio is the natural sign of the 8th House and is the sign of shared resources. This could of course be physical, emotional or even a spiritual alliance that provides a shared income. As the Sun ingress to Scorpio in an opposition aspect (180 deg, tense) the Moon and Uranus in Taurus. The building interest of the past two weeks for example in a murder in Saudi Arabia’s Embassy in Turkey, a caravan of migrants from Guatemala, or conflict on the border of Gaza, see to reach a climax. Compulsive behaviors are also prevalent this week. Uranus in Taurus is adamant and will use force to achieve a goal that is in opposition to the status quo, and thus revolutionary. 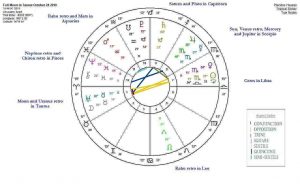 Wednesday October 24th –  Venus retrograde is in a sextile aspect (60 degrees, friendly) to Saturn in Capricorn. Gradual control is being applied. While authorities set limits (Saturn), revolutionary actions persist (Venus retro) and may comply with the limits for a more controlled action. Venus retro in Scorpio may try to undermine authority (sextile Saturn in Cap).  Pluto is the dispositor of the Sun and three planets is Scorpio, urging a transformation. While some astrologers still refer to Mars as the ruler of Scorpio, Pluto better represents the transformative nature of the sign. The transformation happens through a psychological death and rebirth. Jupiter in Scorpio is in a trine aspect to Chiron retro in Pisces as we search for answers and solutions to the crises that are presented today.

Thursday October 25th – As Venus retrograde is doubly approaching the Sun (moving into a conjunction with Venus retro and Sun direct), Venus will undergo a reduction of active influence, in Scorpio a transformation takes place. As Venus represents the feminine side of nature, it loses some of the power of the #Metoo movement. A transformation occurs as Venus returns to Libra on Nov 1st, and works in the political arena.  Women are asserting their rights and will take more action in the politics, seeking office and influence. In the Arab world throughout the Middle East, women are organizing to abolish polygamy and to gain personal freedoms. The Moon in Taurus is sextile aspect (60 deg, friendly) to Neptune retro in Pisces, for increased care and potential dissolution of conflicts.  More understanding helps to make changes to benefit health. The Moon in a square aspect (90 deg, harsh) to Mars and a trine aspect (20 deg, easy) to Pluto, the activation of the semi–sextile (30 deg, mild) between Mars and Pluto, a collaboration may take place with the goal to maintain power. The Moon is in an opposition aspect (180 deg, tense) to Mercury later in the day, indicationg the assessment and implementation considered.

Friday October 26th – Venus supersedes the Sun’s position in retrograde motion to seek individual expression when in Libra, as the ruler of Libra. Venus returns to Libra in a few days. While lacking in complete expression under the more powerful solar influence (the Sun), a transformation takes place. The Moon is in an opposition aspect (180 deg, tense) to Mercury and Jupiter in Scorpio as social pressures mount, including oppression of voices for equality and justice.  While a revolution seemed to be at hand, voices of reason seem to prevail.  This may now be a reversal of opinion, as options narrow.

Saturday October 27th – As Venus and Uranus will face off in a new opposition (180 deg, challenging aspect), the Sun is in a sextile aspect to Saturn in Capricorn. Saturn allows us to slow down and maybe process the revolution. The Sun and Venus as well as Mercury and Jupiter are disposed of by Pluto. So, Pluto has tremendous influence this week. I think the current manifestation here is Pluto rather than Mars (old ruler of Scorpio). However, Mars in Aquarius is semi- sextile (30 deg, mild) to Pluto in Cap, and therefore sympathetic to the power structure, and will tend to nudge extreme measures, either oppressive or transformative. To bring about the desired revolution, a recognition of power is essential. The revolution is peaceful (Venus), but radical change is needed. Resources must be made available. With Uranus in Taurus and the Sun and 3 planets in Scorpio, the power that comes from wealth is emphasized.

Sunday October 28th – The Moon in Gemini is in a trine aspect (120 deg, easy) to Mars in Aquarius, and in a quincunx aspect (150 deg, complex) to Pluto.  A powerful backlash could be triggered with this aspect, as Mars activates Pluto. The Sun in Scorpio is in a sextile aspect (60 deg, friendly) to Saturn in Capricorn. Focused intentionality could work to modify the imbalance that occurs.  Mercury approaches a conjunction aspect (0 dg) with Jupiter in Scorpio, disposed of by Pluto, as powerful entities accumulate more resources and wealth.

Monday October 29th – The Moon ingress to Cancer early today is in a sextile aspect (60 deg, friendly) to Uranus in Taurus. Uranus is in an opposition aspect (180 deg, tense) to Venus retro in Scorpio. As Uranus is disposed of by Venus, as dedication to transformation in medical research could be made, as more radical (Uranus) procedures are implemented. The Moon in Cancer (in sign of rulership) opposition aspect to Saturn in Capricorn (sign of rulership) show a conflict of interests in parental responsibility. Chiron is in a trine aspect (120 deg, easy) to the Mercury and Jupiter conjunction in Scorpio, while the Moon is trine aspect to Venus retro and the Sun. Friendly forces help to resolve conflicts.

Tuesday October 30th – As the Moon is in a trine aspect (120 deg, easy) to Neptune in Pisces today, indicates that healing promotes the dissolution of blocked energy. The Cancer Moon in an opposition aspect (180 deg, tense) to Pluto in Capricorn could also remove stagnation. While the Venus opposition aspect to Uranus strengthens – innovative measures are implemented over time. Reducing income inequality, supplying emergency aid for victims of disaster and assistance for the homeless again take priority. Later in the day, there is a trine aspect from the Moon to Mercury and Jupiter in Scorpio, as well as a trine to Chiron in Pisces making a grand–trine configuration in water signs. Psychic energy flows as healing progresses.