The month of August promises to be remarkable for its two eclipses and a stirring up of world order that presages a fixed alignment of nations and ideologies.  Shifting alliances and diplomatic moves result as the Moon in Sagittarius prepares to meet Saturn, the standard of law and diplomacy.   Traditional allies and strengthening ties could rush to fill the gaps.  The personal pride intensified by Mars and Sun in Leo as the Moon forms a trine aspect to the pair in recognition of the motive (Mars) and the conscious (Sun) unified force. At the Full Moon eclipse on the 6-7th of August, the alignments are just forming.

So this week we are looking at a Full Moon that is also an eclipse and at a time when we are unable to really integrate a lot of desperate energy that is being generated. Many urgent issues remain unanswered. There is a wide trine aspect (127 deg) (Saturn to Uranus) that is moving in a separating direction for now, but as Saturn will change direction on August 26th, the aspect will be closer by next month. Uranus changes direction (apparent motion) on August 4th, so its direction is towards the trine aspect with Saturn. However the aspect is still 7 deg wide by the end of August. Saturn could apply a calming energy to erratic Uranus. Saturn could help focus and integrate Uranus’ views that are unacceptable to legal or philosophical processes that are acceptable today. It is in early November 2017 that this aspect becomes a full strength influence. Until then, we gradually apply the brakes. Uranus rules things electric, and this eclipse could affect many electronic devices temporarily.

Wednesday August 2nd – With health care debate, and serious international threats on the horizon, there seems little time to wait to get your house in order, Mr. Trump.  The appointment and reshuffling of the administration contributes to the chaos, as a result of conflicts and lack of preparation on the part of the Chief. Uranus trine Trump’s natal Mars and ascendant, the point of the second eclipse this month on the 21st, at the Full Moon, focus the intense energy of transformative passion in fire signs (Aries and Leo) on the actions of the Commander.   You can’t put a nice gloss on that and say it’s all in order. The house has been in disarray.  In the waxing lunar phase, the immediate crisis has passed as arrangements are made to move forward. If the underlying structure is still weak, time will tell. A quick fix that neglects to address the underlying causes of will be unsustainable.

Thursday August 3rd – The Moon transit of Saturn early today in a somber mood. Saturn contracts issues and focus is more intent now. The fire energy gains as the Moon progresses to a trine aspect with Uranus in Aries, engaging in more dynamic process. Chiron in Pisces remains an uncomfortable reminder as an undercurrent as if it were a neglected or abused mentor. Venus in Cancer and Mercury in Virgo lack influence now as the Jupiter and Pluto harsh square (90 deg) aspect closes into the partile (exact degree) formation. The power of the social union (Jupiter) and an appearance of conformity (Capricorn) conflict. Mending one’s own fences (Jupiter) denies a position of strength (Pluto). The King cannot be moved into a position of checkmate.  Trump will have to back down and sign the sanctions bill into law.

Friday August 4th – The Moon’s transit is into Capricorn where there is a contact with Venus by opposition (180 deg) aspect and Mercury by trine (120 deg) aspect.  We can communicate , reach out in friendship, discuss issues of a personal nature, and find more comfort and solace in relationships. Venus in Cancer is disposed of by the Moon in Capricorn. A voice is heard and a rescue is underway. The Moon’s quincunx aspect (150 deg) to Mars in Leo allows for more creativity and adjustments in the proposals.

Saturday August 5th – The possibility of a more flexible position on the part of adversaries arises, as the Moon transits Pluto. Legal issues (Sag) still have the boundaries (Saturn) drawn, as Saturn disposes of Pluto and the Moon in Capricorn. Each must respect the power of the other, and the power of the law (Saturn).  Limitations on power become clear so that there can be no usurping of position or overstepping one’s mandate. Jupiter in Libra is in a square aspect (90 deg harsh) to Pluto and the Moon, expanding and contracting the relationship as a balance is struck, a deal made.

Sunday August 6th – The Moon ingress to Aquarius today, gathering friendlier vibes, as power figures bow to humanitarian issues. A collective (Jupiter) is pivotal in the formation of a T-square as Ceres opposes Pluto.  A more earth-bound favor is created as Ceres is trine (120 deg) to Neptune in Pisces and sextile (60 deg) to Mercury in Virgo. This humanitarian position is important for winning favors. The change in attitude is necessary. Winning can be tied to the gracious acts of humanity rather than to the ambitions of power. 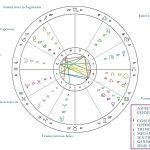 Monday August 7th – The Full Moon eclipse today does not fully activate Uranus, as there are no major aspects to Uranus, however, a Grand–Trine in Fire signs is forming, will be partile (exact) at the eclipse and New Moon on August 21st. The Full Moon eclipse on Feb. 11th of this year fully integrated Uranus with a grand-trine to the Moon and Saturn, and Uranus sextile to the Sun. The New Moon eclipse on August 21st does involve Uranus in a grand-trine to the Moon and Saturn, and a wide opposition to Jupiter. This integration of Uranus and also Mars in the upcoming New Moon is a good indication that we are going to then be able to involve the more radical and revolutionary voices into the national dialogue. That energy will be tamed to help motivate and set a new direction for the next few months or years. This is not for or against any one person or against the President. This is a real shift in direction for all.

Tuesday August 8th – The Moon advances into the 3rd decant of Aquarius, where we are able to adjust and moderate between the strict lawmaker (Saturn in Sag) and the radical elements (Uranus in Aries). As the Moon is disposed of by Uranus, in Aquarius we understand the direction the revolutionary ideals want to take. Yet we are bound by the limitations of law, the limitations of social structure and balance (Jupiter in Libra) of the two forces. This can be a rare moment of acceptance and mutual understanding about the role of office and personal participation.