The rare chance to witness Mercury retrograde action over Pluto continues this week.  We know that Pluto has the power to transform, to regenerate, and at times also destroy.  A resurgence of war efforts on both sides of a conflict, the elimination of a candidate, or the re-entry of a candidate, the transformation of the political field, are some of the results we can expect at this time. Mercury acting as a trigger, transits Pluto twice in about 10 days time. Mercury’s action is to bring the message, and this time it is decisive.

Wednesday January 27th –A renewal of energy, a possible transformation takes place as the Moon in Virgo is trine aspect to the Mercury–Pluto conjunction in Capricorn.  This renewal is most likely a product of personal effort in practical matters (Virgo) and could produce big changes. A threat from ISIS has been received, as they are threatening not only Europe, but Libya, and in vague terms the USA. The foothold on Libya seems de-facto.  In the US, plans are reformulated in the political arena, as new candidates may be entering the race, while others may fall aside. The Moon opposes Chiron soon after the fallout, and seeks to heal the wounded. Ceres, also a sphere that promotes a protective nurturing aura, is now in Pisces.  Mercifully, the Moon’s transit of Jupiter, a few hours later, brings some rewards, expands victories and brings a measure of justice.  Mobilizing massive cleanup forces is also in the realm of Pluto in Capricorn with the Virgo Moon and Mercury involved it, is a perfect scenario, with a pot of stew on the stove to regenerate spirits and strength. The Moon in Virgo is concerned with health and nutrition, while Mars in Scorpio empowers regeneration and shared feelings.

Thursday January 28th – The Moon‘s  entry into Libra in the (morning hours US times) afternoon trines (an aspect of ease and compatibility, 120 deg) Venus in Capricorn as debates are more powerful, with an incentive to topple the charts. Libra gives the appearance of equality, ruled by Venus. However, Venus in Capricorn is determined to reach the power point. An inversion is certainly possible at this time, as Mars in Scorpio semi-sextile (30 deg aspect) to Saturn in Sagittarius, and Pluto close to the square aspect (a harsh and action producing aspect of 90 deg) with Uranus in Aries. While candidates are calm on the outside, their inner being must be in tune with the larger will of the electorate (Pluto and Mercury in Capricorn) in order to get a nomination.

Friday January 29th – The Sun in Aquarius is in harmonious aspect to the Moon, a feeling of improved health and well-being is strong. The Moon could help the aggressive and stabilizing forces to work together, as the aspects to Mars in Scorpio and Saturn in Sagittarius are formed, providing a working agreement, a framework, perhaps, for implementing goals. While success is not assured in every matter, the timeliness of this aspect gives an immediate, although probably a tactical adjustment, to group efforts.

Saturday January 30th – Mercury transits Pluto‘s position again, awakening latent energy, unconscious awareness and group purpose. The harsh square aspect to Uranus in Aries is activated by Mercury, and the influence grows over the coming 48 hours. Venus in Capricorn, in a sextile (60 deg) aspect to Neptune in Pisces could be the artistic communities’ efforts to portray the plight of homeless and immigrants around the globe.

Sunday January 31st – Conflicts open old wounds, as Mercury conflicts with Uranus again, as Mars and the Moon trine (120 deg) to Neptune, easily drawing out venom. Later the 3rd quarter Moon, representing a conflict that will bring about the resolution of questions, debates, forms as the traditional Primary in Iowa is prepared.  While Pluto and Uranus are within a single degree of a 90 deg square aspect, Uranus picks up speed and will be distancing from the aspect. This separating aspect of the two planets will gradually increase and weaken. They will not be in aspect again for several years. This could indicate a period of greater calm and peace developing throughout the world. 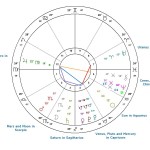 Monday February 1st – The Moon transits Mars, the dispositor of Uranus, triggering an upset alluded to earlier, while Mercury triggers the square aspect of Pluto and Uranus for the final round this year. Uranus in Aries, a martial sign, and an energy that disrupts the status quo, could overthrow regimes, as well as political candidates. Surprise announcements could be made as well as reversals in plans for the near future. As the Moon is sextile (60 deg aspect) to the Pluto–Mercury conjunction, it is a day that the collective expresses their opinions.  Decisive measures are now put in action.

Tuesday February 2nd – Mars and Moon in Scorpio are disposited by Pluto, as Iowans go to the polls.  This middle-America, bread and butter farming state may not be impressed with the grand schemes proposed by the candidates for either party.  Much more down-to-earth Iowans are a litmus test for political strength in the nation. Candidates will take note of the outcome, and this could derail many political hopefuls. Uranus’ position by aspect to the major planetary indicators certainly is in corroboration with this tradition. The Moon enters Sagittarius in the afternoon, as a new political reality is announced. The Sun in Aquarius, in an approaching sextile (60 deg) aspect to Saturn, shows acceptance of the opinions of mid-America.  A groundswell introduces a new political power status and rankings are made accordingly.