As Mars in retrograde phase backs into Capricorn we get chance to re-organize. With Mars in Aquarius there was an overwhelming sense of possibility. Now we again look seriously at the situation we are in. How can we improve our situation while maintaining stability, and plan for the next push into a future phase of idealism and dis-unity? Mars in an earth sign, such as Capricorn- a yin sign, polishes the furniture. Mars in an air sign, such as Aquarius- a yang sign, sees opportunity for the future, caring little about the past. So, for the next four weeks, we concentrate on a secure structure before we take off on the next space odyssey when Mars returns to Aquarius in mid-September. This may mean economic measures, infrastructure repair and/or governmental housecleaning. With Mars, Saturn and Pluto retrograde in Capricorn, this would be an intense time of review and reorganization. We may need to apply for loans for business re-structuring, or take a keener interest in political affairs. We may need to re-organize our homes and prepare for the coming storms. The Sun and Mercury retrograde in Leo help us find creative avenues for self-expression as we personalize identity.

Wednesday August 15th – The Moon in the second decant of Libra transits to a quincunx aspect (150 deg, complex) to Neptune, as a more creative lead is called for. How can we balance (Libra) our joy (Venus in Libra) with an abyss of suffering (Neptune in Pisces)?  Active participation is evoked by the yang sign Libra. A housecleaning, an actual radical purging begins. Each moved is analyzed and debated.  The Moon then in a square aspect (90 deg, harsh) to Pluto in Capricorn (the power center) hits a raw nerve. As a result, a reserve of pain is likely to overflow. A balance is sought, but first we must remove the offensive matter. The slower moving Saturn trine aspect (120 deg, flowing) to Uranus (in earth signs Capricorn and Taurus) continues as the work to build and rebuild against a destructive power slowly makes progress.

Thursday August 16th – The Moon ingress Scorpio arouses deeper emotions, off-setting actions, in opposition aspect (180 deg, tense) to Uranus and sextile aspect (60 deg, friendly) to Saturn. we could begin to define the root of the destructive power. Revolutionary (Uranus) backlash against passionate resolve could be a stale-mate in the contest, a tug-of-war destructive effort, while Saturn trine aspect (120  deg, flowing) to Uranus could block the will power, and resolve the action through diplomatic means. Legal issues may be implemented to overcome inertia. The Moon makes a square aspect (90 deg, harsh) to Mercury in Leo, as we try to resolve difficulties, or become more deeply enmeshed in controversy.

Friday August 17th – The Moon is in a conjunction aspect (0 deg, combining) to Jupiter at 15 deg, the very center of Scorpio, trine aspect (120 deg, easy) to Neptune at 15 deg Pisces. This brings to climactic peak the Jupiter-Neptune contact that has been operating of the past several weeks.  We can increase our enjoyment even by indulging in the risks and suffering inherent in the two water signs, Scorpio and Pisces. This could become a quagmire of debt or satisfaction in a reciprocal relationship, for example.  On the negative side, it could also be deception or entrapment. While this is a slippery slope for some, it could also be, when in conjunction with other planets, a path to rehabilitation and redemption.  We may find inspiration for our strengths or escapism for our weaknesses. It could be a very big gamble. While there may be regression during this trine aspect to Neptune, there is also the possibility to work out of difficulties. Venus is in Libra, the sign of its rulership, and therefore strengthened. Escapism might actually be viewed as justified, if expressed in context. Mercury retro in Leo is squared (90 deg, harsh aspect) by the Moon and sextile aspect (60 deg, friendly) to Venus. This “working trine” the sextile could fabricate justification, or give dramatic performances. 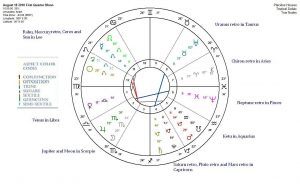 Saturday August 18th – The Moon progresses to the final degrees of Scorpio, and in a square aspect (90 deg, harsh) to the Sun in Leo, the first quarter Moon conflict [see about image]. The released energy and awareness could help us understand the Jupiter–Neptune addictive slide.  The six planets in retrograde plus Chiron retro, help us get under the veneer, and locate a basic conflict highlighted by the Sun-Moon aspect of conflict. We begin to integrate many fragments into a whole. What is the basic or underlying cause of illness or dysfunction? Saturn applying to the trine (120 deg, flowing) aspect with Uranus continues a long-term influence and gradually becomes closer to a solution or definition. To begin the process of healing, one must first remove the stagnating material object. Technology (Uranus) combined with a scientific technique (Saturn) moves us forward in the quest for wellness. Mercury turns direct as the sextile aspect (60 deg, helpful) to Venus and a trine aspect to the Moon in Sagittarius leads us forward to action stimulated by political and legal discussions.

Sunday August 19th – The Moon in Sagittarius is trine aspect to Mercury in Leo overnight as Mercury returns to direct (apparent) motion. The Moon forms a square aspect (90 dg, harsh) to Neptune, as emotional responses are deflated. Mercury sextile aspect (60 deg, helpful) to Venus and quincunx aspect (150 deg, complex) to Neptune refocuses thinking and communication. Attitudes are shifting as court decisions are made (Saturn, Pluto and Mars in Cap).

Monday August 20th – The Sun in Leo transits to a quincunx aspect (150 deg, complex) to Mars retro in Cap. Mars in retreat trades fanciful goals for concrete decision making. A suspenseful drama plays out (Sun in Leo) as manipulation of legal conventions (Mars retro in Capricorn) search for a lawful refuge. The Moon in Sagittarius transits to a trine aspect to the Sun in Leo, connecting the two fire signs, as the Sun transits DJT’s natal Mars and Ascendant. The President, with his natal Mars in Leo on the Leo Ascendant, is sure to speak forcefully to protect his image.

Tuesday August 21st– As Jupiter supersedes the trine aspect (120 deg, flowing) with Neptune, Venus in Libra approaches the quincunx aspect (150 deg, complex) to Neptune’s enigmatic energy. With the release of hidden documents, or personal depositions, Venus weighs the arguments and deliberates a verdict. The Moon in Capricorn transits Saturn’s position early in the day. This would trigger some decisive move on the part of the administration.

To subscribe to the Gimelstar Zodiac Newsletter, please enter your name and email address in the form at the bottom of the page. That way you won’t miss the postings and will be able to refer to the analysis throughout your week.