As the week progresses, the Libra Moon will be in the creative quincunx aspect to the planets and asteroid Chiron, starting with Neptune early today, and then to Venus, we may be able to adjust our hopes and fears to a more delicate, more sensitive reality. Yet, when the Moon’s square to Pluto takes place, with the conjunction to Jupiter following, we are once again in a position to be overwhelmed by the underlying issues that surface, although the expose is liberally announced and examined by the press (Jupiter in Libra) the consequences may be far-reaching, as Pluto in Capricorn is a draw for power issues. The square aspect could be the unexpected release of detailed information related to government (Mercury in Capricorn) and disposed of by Saturn in Sagittarius. Saturn is disposed of by Jupiter, while Venus is the dispositor of the Moon, Jupiter, and Neptune in Pisces is the final dispositor. Uranus is disposed of by Mars in Pisces, whose dispositor is then Neptune as well. Neptune the ruler of Pisces, with three planets and Chiron in Pisces, is the hidden yet powerful provocateur, unconscious or underlying energies that have been dormant for some time, suddenly grab the headlines.

Wednesday January 18 – Mars in Pisces is quincunx Jupiter today, and a square aspect (90 deg harsh) with Saturn in Jupiter is within the one degree orb of influence. Mars is less effective at goal-reaching today, seeming to be preoccupied or submerged in unconscious issues, yet awakened by the harsh square aspect to Saturn, which demands organization and awareness. The Moon transiting Jupiter, then opposing Uranus and hours later sextile to Saturn then replays the Saturn–Uranus trine of the past few weeks. Mars is likely to upset the complacency and draw out the venom, forcing awareness on the situation.  It could then be open to addressing issues that have remained in the underworld or unconscious.

Thursday January 19th – Mars–Saturn square aspect beings into sharper detail the outlines of a dawning reality. We become more deeply entrenched (Saturn), and at the same time, more aware with a heightened sensitivity (Pisces). Natives with an easy aspect between Saturn and Mars in their natal charts are more likely to deal with this time-frame with greater ease. A trine aspect between the two malefic planets, may simply soar over the problems, a sextile (60 deg aspect) in the natal chart would give the ability to apply solutions to overcome difficult situations.  Other indications such as house placements and other aspects are also significant to the direction the Mars–Saturn aspect makes in individual circumstances. The Moon in Libra forms a qunicunx aspect to Chiron (the wounded healer) and Mars (goal oriented energy) in Pisces, thus highlighting difficulties or giving opportunities to moderate and compensate for the current crisis. The Sun (ego or persona) in the final degree of Capricorn may want to settle disputes, organize and take charge of a transition. 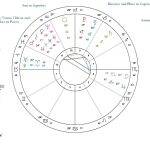 Friday January 20th – The Moon in Scorpio, disposed of by Pluto, Scorpio’s ruler, gives us a strong sense of shared feelings. Participation in the national demonstration of unity or cultural festivities is favored. The Moon trine Neptune sets an emotional depth to the most awesome events. The Moon sextile to Mercury in Capricorn allows for measured reporting and conversation that is both shared (Scorpio) and specific (Capricorn). The Moon in a square aspect to the Sun denotes the 3rd quarter Moon phase, and a crisis resolution.

Saturday January 21st – The Moon sextile Pluto and trine Venus today is a moderating influence giving a possibility of more individual acceptance of group feelings. Large gatherings are again motivated to expresses opinions and group consensus. The Moon’s dispositor, Pluto in Capricorn, is a controlling and standardizing influence. National ceremonies have a cohesive effect on the citizens. As the Moon moves on to trine Chiron and Mars in Pisces, more aggressive actions are possible, although the disenchanted and the expressions of dissent may typify the day.

Sunday January 22nd – As Saturn in Sag square (90 deg aspect) to the mid-point of Chiron and Mars in Pisces today, authorities address the ills and discontent, some radical approaches may be implemented. Calming the waves of protest (Mars in Pisces) with a stabilizing or paternalistic approach may work for a time. The Moon in Sagittarius is sextile the Sun in Aquarius, opening avenues of communication. New interest is awakened with new policies or promises.

Monday January 23rd– Mercury in Capricorn sextile to Neptune in Pisces gives us open mic. Everyone and anyone can speak and make an opinion heard.  The Moon in Sagittarius is square (90 deg aspect) to Neptune in Pisces will open hard feelings and force some critical expression. Rejection or transformation is an individual process. Jupiter in Libra sextile to Saturn in Sagittarius remains in effect, although weakens as Jupiter slows and will turn retrograde on February 7, 2017.  Thus, enthusiasm over presidential power to implement change weakens.

Tuesday January 24th – As the Moon approaches Saturn in Sagittarius, the authorities gain in power, invigorating or even focusing attention on areas of concern in legal issues and in legislative action. The Moon trine to Uranus in Aries awakens salient forces in a power struggle. The limitations and justifications (Saturn) of power, the indiscriminant use of force (Uranus in Aries) and the free press (Sagittarius and Libra) are demanding issues that the insurgent forces (Neptune, Mars and Venus in Pisces) are urging, through the dissident and indigent populations (Pisces). With Venus and Chiron in Pisces, a minor aspect, the semi-sextile, leads to requests for moderation as the simultaneous  square (90 deg) aspect is formed to Saturn and the Moon and the quincunx aspect to Jupiter, involving innocents in the struggle for security and a voice for liberty (Jupiter in Libra).

P.S. I will be arriving in Goa, India on Friday January 20, and will be posting from that location next week!

Are you interested in improving your health?  Please visit my website to read some important news in this regard www.shoshanawerbner.com