The mind and heart shattering news of the past weekend should be the ultimate reminder of changes that should have been made long ago.   As an astrologer, a psychologist and a parent, as well as an individual striving to achieve personal goals, I can say that while I respect the rights of individual freedoms, the right to bear arms is contingent on circumstances and the changing world reality. Assault rifles on the market today did not exist in 1776.  The Constitution of the USA allows for change and that is one of its greatest strengths. To insist that the Constitution gives a right to harbor multiple guns of deadly assault capacity simply does not hold up in the final analysis.  Those who are preventing the laws from changing are simply benefiting at the expense of the lives and freedoms of others.

This week, Pluto retrograde in Capricorn and Jupiter in Virgo are doubly approaching their trine aspect in earth signs. This is putting greater pressure on government (Pluto in Capricorn) by the electorate (Jupiter in Virgo) through the democratic process (Saturn is the dispositor of Pluto) Saturn in Sagittarius is in a closing square aspect to Neptune in Pisces– the elimination (Neptune) of the legal loopholes in gun purchases (Saturn square Neptune) seems preferable to international isolation.

Wednesday June 15th – While you may be narrowing in on long-term debt (Saturn square Neptune in Pisces), government may be narrowing in on long-term debt to citizens (safety in the community). Neptune turns retrograde today, as the strategies that have worked, and maybe those that haven’t, are re-examined. How to put limits (Saturn) on the boundless (Neptune), is the central problem in both cases. Here we may need to reverse our thinking, reprioritize and define the real goals. The Moon moves into Scorpio today, focusing on the cycle of terror, of death encountered by violence.

Thursday June 16th –   As the Moon is in trine (120 deg) aspect with Neptune today, we may be able to resolve some of the fears that have limited us in the past. While lunar contacts are short term effects, they can stimulate change to create new possibilities. Neptune in the close square aspect to Saturn may yield some of the mystery, the deep unconscious fears that reside, to allow for a narrowing and defining of the conflict. Maintaining justice may be in the final analysis, more important than standards that are outdated.  Unfortunately, laws are usually modified after tragedies strike. Foresight is sadly lacking when rigidity (Saturn) is the primary concern.

Friday June 17th – The Sun in Gemini is in a harsh square aspect to Chiron, seems to indicate even forcing adaption of views that will be more acceptable and a healing effect on the majority, the cultural unconscious, the emotional underground of social interaction. Mars in Scorpio is at the same time trine to Chiron, calling out the healer within. Mars retro in a quincunx aspect to the Sun evokes more creative solutions. Direct actions are not advisable, but inner values are examined, shared feelings and social goals are discussed. The Moon trine Neptune allows for an outpouring of emotion, even as Saturn and Pluto become intrinsically involved (political and governmental actions).

Saturday June 18th –The Moon’s rendezvous with Mars in Scorpio today is quincunx (150 deg) aspect to Uranus, an aspect of differing goals combining in an unusual, possibly upsetting and unprecedented action. The highly unusual although significantly creative response can be effective.  The Mars–Moon trine to Chiron in Pisces might be the action that the “doctor” ordered, to cure the patient in an acute state of disease. Finding the right cure is all important now. It may be illogical and unconventional (Uranus in Aries) but the swift action is tested as the immediate cure. Innovative means may be employed as preventative measures. Inaction could be counter-productive now. Acting on hunches could produce a creative solution to problems.

Sunday June 19th – Venus in Cancer is disposited by the Moon, and as such is very protective in this role. The Moon in Sagittarius is disposited by Jupiter in Virgo, as it is in a square aspect to Jupiter this afternoon. An outpouring of emotion, either of relief or pain can result. Jupiter is one degree orb of an exact trine with Pluto in Capricorn, increasing the likelihood of a strong electorate voice promoting action. The Mars–Uranus 150 deg quincunx aspect exerts pressure as a view of the gathering storm begins to form. While Ceres is conjunct to Uranus, the influence could help turn the radical tendency of Uranus into a beneficial outcome. 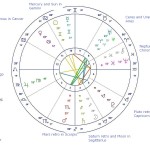 Monday June 20th – At the Full Moon, Mercury in Gemini opposes Saturn in Sag. While communication may be blocked, and misunderstanding prevalent, with Neptune at the focal point, Mercury is in good form in its sign of rulership – Gemini, and could strive to overcome the blocked actions, the ineffective methods that are restrictive and narrow in scope. Innovative ideas may gain acceptance if the voice of reason prevails. Preventive measures should be focused to solve problems rather than exceeding limits (Neptune). The Full Moon at 29 deg Gemini then moves into Cancer– the protective sign of rulership, or the home sign, and self nurturing in its full capacity.  The Jupiter trine to Pluto helps to resolve and integrate issues at the most powerful level. The storm is unleashed if the resolution does not succeed.

Tuesday June 21th – Mercury in Gemini can help resolve conflicting proposals, perhaps to integrate the issues (square aspect to Jupiter in Virgo) into a composite whole. Neither Mercury or Jupiter are aggressive energies, however the square aspect is harsh. The measures taken should be then measures that are forceful and preventative in effect. The media plays a role as do the individuals of interest in the ongoing discussions of violence and gun control that have been prevalent throughout the past few years. It is, in fact a worldwide problem, and the world must address and resolve terror and terror attacks. Isolation in this century (Saturn in Sag) does not recognize the actual phenomena. Looking at the totality, the conflicting powers, a true leadership, a Saturn and Pluto inter-relationship, and the other planets (energies) involved in the overall picture.

With blessings for a secure and enjoyable week,
Gimelstar
Jerusalem, Israel
June 14, 2016

Please send your name and email address to subscribe@shoshananeshri.com