This week begins with the Moon, Venus and Mercury in Scorpio. Mercury continues retrograding on Wednesday, and turns direct on Friday the 7th of December. The Sun in Sagittarius is in a square aspect to Mars and Neptune in Pisces until Friday when the Moon transits to the New Moon degree and Mars is conjunct to Neptune.  While we are often caught up in the national agenda and political discourses, we ought to remember to take time to repair and nourish personal relationships, least we neglect what is near while focusing afar. The New Moon at 15 deg Sagittarius, just past the square aspect to Mars–Neptune, could help deflate over-blown ambitions. Mercury turning direct in this same time-phase redirects energy for goals that may have been diminished earlier. Mercury in Scorpio is in a trine aspect to Chiron in Pisces, while Chiron and Mars are disposed of by Neptune in Pisces. Attention will be given to migrants, to the casualties of war, to homeless victims of fire and floods, for humanitarian efforts at massive transformation.

Wednesday December 5th – While the Sun in Sag is in a square aspect (90 deg, harsh) to Neptune in Pisces, the US honors the past with the passing of a US former president. Mars approaches a conjunction (0 deg aspect) to Neptune, as intended goals are set aside, or dissolved in synchronistic media reviews of decades gone by, and with Mercury still retrograde in Scorpio, resurrecting the past. Venus, now released from the opposition aspect (180 deg, tense) to Uranus, moves forward in Scorpio, to the bidding of a display of power and supremacy.  Venus is disposed of by Pluto in Capricorn, while Saturn in Cap is a final dispositor along with Jupiter and Neptune. A search for a cure (Jupiter) for disharmony (Uranus) is needed to replace despair (Neptune).

Thursday December 6th – The Moon in Sagittarius transits Jupiter today, expanding the influence of the socializing power, as community action groups emerge. Mars in Pisces is reflexively dispersive of energy, uniting with its dispositor Neptune with a conjunction aspect (0 deg, combining), as expected actions are deflated. The Moon travels on to meet up with the Sun (in longitude, not latitude) for a New Moon around midnight US times. The passing of the old guard era, and the dawning of a new agenda is inherent in the new soli-lunar cycle. The Moon is in a square aspect (90 deg, harsh) to Mars and Neptune just before the New Moon, drawing a conflict into the realm of a seed moment for the new cycle. It is a conflict of dissolving what is rotten and the re-positioning of direction taken for the future. 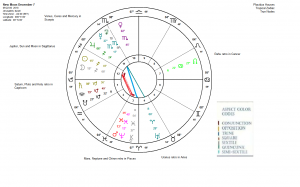 Friday December 7th – Mercury turns to direct apparent motion in Scorpio, with a quincunx aspect (150 deg, complex) to Uranus in Aries. There could also be disruptions in communication such as Internet failures, or stock market reversals, other departures from the norm are also likely today.  There is also possibly a disclosure of secretive communications, or technical advances in the realm of communication.  Mars–Neptune conjunction in Pisces is partile (exact) today. This has been building for several days. As Mars indicates intentional action, there is likely to be some exposure and realignment as this is also at the New Moon (See chart image). While something may be extinguished, something else may blow up, although it is quite possible that they are related events.

Saturday December 8th – The Moon ingress to Capricorn today and sextile aspect (60 deg, friendly) to Venus, as we try to rationalize recent events. We can refine and narrow the scope of interest as the Moon transits Saturn later in the day. There is therefore likely be an attempt to dress-up or put a spin on investigative reports.  Mercury remains in a quincunx aspect to Uranus, as the impact of revelations continues to reverberate. Mercury is in a trine aspect to Chiron in Pisces, an indication that the truth is finally being exposed.

Sunday December 9th – The Moon in Capricorn is in a sextile aspect to Neptune early in the day. We may see distortions and disbelief as an attempt at escapism. With investigations continuing, Mercury quincunx aspect (150 deg, complex) to Uranus continues as Mercury is moving more slowly than at its normal pace, and thus has a greater impact. Mars has transited beyond the conjunction aspect with Neptune, although still in Pisces, so that Neptune is the dispositor of Mars, and action that is attributed to this influence will be resolved by Neptune.  The general disillusionment is a major outcome for Neptune in Pisces. As the Moon transits Pluto later in the day, a shift in public opinion is one outcome, an indication of the mood of the nation. 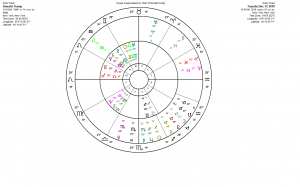 Monday December 10th – The Moon in Capricorn is conjunct to Ketu triggering consequences of past actions. As this is primarily a subject of Vedic astrology, I refer to Vedic experts for this interpretation. For the horary reading, the influence is rather fleeting, not a permanent feature in a specific personality, although if it makes a contact with natal planetary positions, it would then trigger events related to that planetary configuration in the natal chart.  So, for example, looking at the natal chart of DJT, we can see that Rahu retrograde will transit his natal Venus in February and natal Saturn in March. Rahu is opposed to Ketu by sign and degree. It indicates a compulsive force. Venus is primarily an indicator of relationships, while Saturn is personal identity or status. We should get more information about DJT’s personal dealings, perhaps from his own testimony. Today, Rahu is a degree and a half from the conjunction aspect (0 deg, combining) with Trump’s natal Venus in Cancer, (See image inserted above) so that it may already be an influence that will prompt some compulsive and reflexive (Moon) action. He will be compulsive about protecting his daughter, his family and his own past relationships. As Ketu is aligned with Trump’s natal Moon position and with his Full Moon natal chart Rahu is aligned with his natal Sun. He tends to let the past (Moon) relationships resolve while being compulsive about his achievement (Sun), and about matters relating to his own personal life force or consciousness.  The Moon transits into Aquarius late in the day, with a square aspect to Venus in Scorpio as we try to resolve personal relationship issues.

Tuesday December 11th– The Moon in Aquarius is the only planet (or luminary) in an air sign today. We might now attempt to fully understand complicated issues on a more detached intellectual level. A sextile aspect to Jupiter in Sag enhances the lunar reflective power, as we integrate various events of a political or philosophical nature. The Sun in Sag is semi–sextile to Pluto, so there is an urge to transform or reform our positions, and for large group identities to reform or for individuals to question group political actions. The individual (Moon) seeks more freedom of association (Aquarius).  We then question if we belong or wish to break free from ideological associations or causes we have identified with in the past. How can we reform or modify our own personal identities?

To subscribe to the Gimelstar Newsletter, please enter your name and email address in the form at the bottom of the page. That way you won’t miss the postings and will be able to refer to the analysis throughout your week.