We are overtly dealing with trends in the so-called “Post-Truth Era.” Social media affects attitudes and impressions to impact our views and often have more power than truth or fact.

Post-truth politics (also called post-factual politics) is a political culture in which debate is framed largely by appeals to emotion disconnected from the details of policy, and by the repeated assertion of talking points to which factual rebuttals are ignored. Post-truth differs from traditional contesting and falsifying of truth by rendering it of “secondary” importance.  https://en.wikipedia.org/wiki/Post-truth_politics

In this era, political promises are larger than simple campaign rhetoric. They take on an expanded importance in imagination. A massive population, contrary to logic, makes irrational choices. We are witnessing the outcome of an inversion of logic, as the electorate in the largest democracy falls prey to empty promises, to elect a political incompetent.

Meanwhile, news media are attacked by the same political figures for publishing what is termed “Fake News”.  In other words, the political figures expect the news media to report on emotionally charged currents as facts, dismissing conventional reality for the reality of the emotional impact of words. The barometer is set for crowd enthusiasm. The social trend is the fact. The new wave is the reality. The style and the oration are more important than the truth in the message itself.

The long-term trends of an era are best indicated in astrology by the slow-moving trans-Saturnian planets, the distant planets that exist outside the orbit of Saturn. They are slow-moving from Earth’s perspective, as our astrology is geo-centric and person-oriented.

We see notably, Neptune in Pisces. Neptune has the power to obscure, to deflate or inspire. We may find new meaning for old subjects. We may even rediscover ancient mythology. Truth may be hidden beneath the surface.

Uranus, the first planet beyond Saturn can break up traditional ideas with revolutionary ideas. The power of electronic media is embodied in the concept of Uranus’ energy. We begin to see a more advanced and more complex reality. Truth is no longer linked to tradition and to the past (Saturn). Uranus in Aries during this era has a pioneering instinct.

While Pluto, the planet that we currently denote as the farthest outward in the solar system (also denoted as a dwarf planet due to its small size and outside the try path of our solar system), has reputed power to compel as well as to destroy, in fact it denotes a power to regenerate the era. Pluto is currently traversing the sign of Capricorn. This is a sign that appeals to standards and fact.

The undercurrent of Neptune is resulting in a trend to obscure fact and truth for an emotional appeal, and a disregard of traditional structures in government (Capricorn). It is a cultural symbol that influences large mass of population. In this era, Neptune in Pisces relates to the migration of masses toward the more secure and more stable political and economic nations. It is a movement from the old to the new, a transformation of individual awareness, and cultural flux. With great risk involved (Uranus in Aries), individuals are moving en mass to escape the oppression of nations ruled by the fist (Pluto in Cap) to the cultural advantage they see in the democratic enlightened world. If the democratic nations crumble, the enterprise will be lost indeed.

Old alliances may no longer hold. New arrangements are forged in political (Sagittarius) and social order (Capricorn). Saturn in Sagittarius is the focus of the era, as political ideals are tested. Saturn is the planet associated with Capricorn, therefore referred to as Capricorn’s ruler in traditional astrology. With Pluto in Capricorn, Saturn is energized as a result of its association with Capricorn. Saturn (tradition) in Sagittarius (philosophical thought) is as a result of the Pluto transit of Capricorn, undermining political thought and international world view in the lens of power and politics. The resurgence of nationalistic attitudes, the breakdown of international alliances is the current result, and possibly only a beginning for the new era.

The three planets outside of Saturn’s orbit, and thus outside of the ego’s framework of tradition and social conformity, are largely active on an unconscious level and thus not subject to individual awareness, in ordinary personality structure. It is when the unexpected or extra-ordinary events force us to re-examine long held beliefs that we become subject to transits and aspects they form to personal and social planets- sign-posts of the individual psyche. Then personal lives become affected by the reformation of power (Pluto in Capricorn).

A famous quote attributed to Abraham Lincoln is timeless. “You can fool some of the people all of the time, and all of the people some of the time, but you can’t fool all of the people all of the time.”  Time is transient, as it the current fad of the “Post-truth Era.” Events will lead to a new realization, whatever that may be. Perhaps the current configuration of Uranus opposed by Jupiter (Aries to Libra), is a sign of social complacency. We absorb (Jupiter) the unpredictable (Uranus). We go along with the crowd (Neptune in Pisces). The emotions evoked for a change in the power structure may be just the beginning. The trend may sour as disillusionment takes hold. New voices call forth the standards of democracy and once again bring out a more progressive mood swings the barometer to another era of enlightenment.

Saturn turns retrograde in April for a prolonged stay in the sign of Sagittarius, ruled by Jupiter, and finally enters Capricorn in late December 2017. Uranus turns retrograde in August, and enters the sign of Taurus in May 2018. In August 2018, Saturn and Uranus are trine aspect (120 deg easy) in earth signs, as we look forward to more peace and smoother going, a time of increased material prosperity with Pluto in the earth sign Capricorn. It may be power in the hands of a few, but a few who are capable is preferable. Hopefully, democracy will survive. 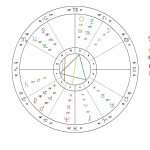