Virgo is shining now, with the Moon transiting late tonight, and the next two days, to join Jupiter, Venus and Mars. A close conjunction of Venus and Mars today and tomorrow makes this a great time for repair work, on personal issues as well as on travel or communication devices. As my natal Virgo Moon is caught up in the Jupiter transit, I am having issues with communication devices. Both my car and my computer needed technical work, both were had problems with electrical supply, and both stopped responding. How co-incidental can this get? Jupiter conjunct natal Moon (natal Uranus is square to natal Moon). Transiting Uranus is quincunx natal Moon and Jupiter (exact). Chiron in opposition to natal Moon (exact) offers a way for support and resolution.

Mercury, the dispositor of the Virgo planets, is in the first decant (1-2 deg) Scorpio, so this makes it also a great time to work on marriage or relationship issues. Our co-workers gather for discussions. Each, of course recognizes his or her importance, but it is also necessary to recognize that we are not the point of the other’s existence. Working relationships develop through mutual trust, support and recognition of independent value. Avoid oneupmanship in the work place.

Wednesday November 4th – The planets in Virgo. soon joined by the Moon, bring us back to basics, in an earthy mode. As I am now writing with pen and paper, I am amazed, as always with the accuracy of the transits, as for now I am posting on a daily basis, a trip back to yesteryear. The ability to focus and resolve issues occupies may be on target today. Health issues may bring about underlying problems, with the Moon in opposition to Neptune today. the Mars–Venus transits enable working together to solve issues, or communication problems. Avoidance of the problems can also be a method. Worldwide migrant issues, homelessness, incarceration, take the headlines and much of the press these days, are social and economic problems which are a daily issue for host countries.

As we turn towards winter time, (Northern hemisphere) the mood shifts as we work to prepare for the winter season. Accumulated technical problems surface, and often are accomplished and seemingly effortlessly to resolve at last.

Wednesday November 4th – With the Moon in Leo, Venus transcends Mars in Scorpio, as relationship issues are a primary concern, we can feel romantically inclined, but all in all, it is the practical concerns that are important to overcome, or to find a way repair damage. That could mean help is offered in a very friendly way, understanding each others concerns. With Jupiter in Virgo, closely opposing Chiron today, while quincunx to Uranus (exact) specifically, when trying to make amends, things might need a more creative approach, more patience, or there is a possibility of unexpected results of an explosive nature. Working on anger and impulsiveness is favored, as the radical Mars is tempered by the Venus conjunction. With Mercury in Scorpio, the dispositor of the planets in Virgo, a transformation of competitive sports analysis or underlying assumptions are challenged., especially in regards to women’s competition. An advancement of equality in the work place or in sports, on the playing fields, is likely.

Thursday November 5th – The Moon enters Virgo today, some are finding some legal issues, with a square to Saturn, and a sextile to Mercury, legality is again a question of point of view. Health issues and health plans and programs may be questioned again, as a national health care plan is again facing rejection on some quarters. The Moon trine to Pluto could ease the way for continued universal health coverage. Many voices may be heard, with varying points of view. Placing the individual at the center of the discussions, and how best to meet her or his medical problems and issues, addressing personal health care, is at the core of the debate. The Sun is sextile to Pluto and the Moon indicating compatible working relationships. 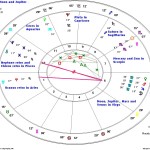 Friday November 6th – At last the Moon reaches the planetary group in Virgo, expanding our work or areas of interest with the conjunction of the Moon and Jupiter. The unusual circumstances of the past few days, are now highlighted, with rewards or at least some acceptance due to the technical details that prove the case. For example, the crash of a Russian plane in the Sinai Desert. Resolving issues by changing laws, or by changing the appearance of or a crime to cover up another crime is repeated over again. A tragedy becomes more real, in Virgo analysis proves the cause, and denial or cover-up can no longer hold water. Political considerations surrounding events can have a regional and worldwide impact.

Saturday November 7th – The Moon transits Mars and then Venus today, bringing to awareness motive and emotional release, perhaps in sorrow or mourning, perhaps in successful relationships. Mercury’s trine aspect to Neptune, expands sorrow or empathy, a universal response to loss. As the Moon enters Libra, in the afternoon or late morning (depending on time zone) and soon after is trine aspect to Ceres, as efforts are made to extend care to wounded, or families of victims. Extending benefits or health care under a universal coverage scheme is a possible result.

Sunday November 8th – In Libra we tend to balance issues, facts, or point of views. The Moon’s transit of Libra, begs for the answers. A square aspect to Pluto could indicate a conclusive announcement by officials or authorities that claims to settle the issues. The opposition to Uranus in Aries that follows, a few hours later could continue a state of denial or rejection of the claims, such as terrorist actions or other unexplained incidents, involving explosions. Mercury in a trine relationship with Neptune could lead to distorted reports, based on a lack of factual evidence.

Monday November 9th – The Sun and Mercury in Scorpio continue to fascinate with mysteries and exposes of secrets, perhaps unwittingly revealed after loss of life. The postmortems reveal life in its failures and successes, the dark paths and the glories. Dreams and inventions for future creations or exploits surface again. Venus enters Libra today, bringing a lighter, or more hopeful time. Libra is a mover, a goal oriented achiever, and Venus, as the ruler of the cardinal sign of the scales, wants to believe in justice and equality.

Tuesday November 10th – The Moon enters Scorpio today, in the final hours of the cycle, preparing for the regeneration, the death and rebirth of the psyche, celebrated in each of the signs, throughout the year, but now ever more strongly, as renewal coincides with an emotional, psychological or spiritual transition. With seasonal changes, lengthening nights, the Sun itself is approaching the mid-winter point of the solstice. In Scorpio, the fixed–water sign, a deepening awareness of roles regarding social activities as they affect individuals, forging a participatory path, through marriage and family life, awakens. A forage into the unconscious motivations of others may fascinate, while truly only our own motivations are fully knowable. Voyeurism may be simply a technique to avoid our own self-realization. The New Moon on November 11 at 5:48 PM GMT, is not the moment of self-realization, but a symbol of the possibility of reawakening deeper understanding of partnership roles. Thus, the hours and days surrounding the celestial event, are most fertile for planting seeds of awareness.