The Sun in Virgo opposes the midpoint of Neptune and Chiron in Pisces, and indicates the possibility and benefit of the lessons to be learned in managing, predicting and preventing future natural disasters. While the Sun in Virgo is wary, service oriented, Neptune in Pisces, brought out by the Full Moon on the 5th -6th of September, now in the 3rd quarter of the lunar cycle, repair work continues ,with a crisis in dissemination, as Florida attempts to dry out.  Flash flood sin Italy present a similar situation. If you are unprepared, this would have been a greater catastrophe. Fortunately, with advanced science of meteorology, aerial photography, satellite imagery, and municipal services, many lives were spared. While the wrath of nature was on display, we also had a merging of science and humanitarian services, creating awareness, promoting preparations and therefore survival.  Chiron as the symbol of inner wisdom helps also to avoid the worst and use the acquired knowledge for the safe recovery. A stellium in Virgo forms at the New Moon on the 19th-20th.

Wednesday September 13th – The Moon in Gemini, opposed by Saturn, allows for our scattered energy to be focused on the task at hand.  The situation is challenging.  Moon is trine (120 deg aspect) Jupiter in Libra today, as collective reporting and information gathering helps to assess the relative urgency of the many cries for help. As the Moon continues in its path the sextile (60 deg) aspect to Uranus helps to use technology for assistance. The Jupiter- Uranus opposition (180 deg aspect polarization) grows until the end of September, drawing yet more steadily on the reserves, on ingenuity and advanced technology. A grand trine in fire signs, Saturn in Sagittarius, Uranus in Aries and Venus in Leo promote ease of action, motivation and ingenuity.

Thursday September 14th – The Moon in Cancer promotes feelings of gratefulness for secure homes. Mercury conjunct Mars in Virgo (close to 0 deg aspect), as direction, motivation and planning combine to repair damages. Resources are expanded (Jupiter in Libra).  Jupiter in Libra prefers balance and economy, opposed to Uranus in Aries (180 deg aspect doubly approaching) where economy and balance is made exceptional. As the Moon in her own sign (Cancer)progressed in Cancer, she faces the opposition (180 deg aspect) of Pluto in Capricorn. The Moon trine aspect (120 deg) to Neptune connects with loss and suffering. We can draw on reserves (Pluto) or be crushed by opposing bureaucracy (Capricorn). Blessed is he who has his own. 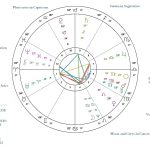 Friday September 15th – [See chart in image above] A quincunx aspect (150 deg) from the Moon to Saturn early in the day, is a favorite for applying ingenuity. Problem solving in the prospect of adversity. The Moon sextile (60 deg friendly aspect) to the Sun is applying the technical ability to repair and achieve satisfaction, and Venus sextile (60 deg friendly aspect) to Jupiter is giving success to working relationships in adverse times (Jupiter opposition to Uranus). The Moon transits Ceres in Cancer, as women gain in positions of management in business and government,, are given more recognition. A square aspect to Jupiter combines the Moon and Ceres  bringing them into sharp focus, expanding the role of women and their contributions to society. The trine aspect (120 deg friendly) to Chiron from the Moon increases respect for feminine wisdom. The square aspect (90 degrees, harsh) to Uranus follows, giving the lunar orb the shake down, a balance needed for the time, in a t-square configuration (Moon square to Jupiter and Uranus) with Jupiter. Turbulent forces surround while in the quest for security.

Saturday September 16th – There is a gradual shift in power as Saturn applies to a trine aspect (120 deg, easy) with Uranus. However, the Jupiter opposition to Uranus (180 deg, conflict) is the most powerful aspect of the day, and continues to increase in strength until the end of September. Jupiter will expand the influence of Uranus, creating more disturbing situations and drawing on greater reserves to counter the growing demands. Saturn in Sagittarius will gradually limit or deny the idiosyncratic and revolutionary impact of radical ideas and personalities into the first week of November when the trine aspect (120 deg easy) to Uranus in Aries reaches partile (exact). Issues that are exceptional or transformational will be defined politically by Saturn. Thus, political camps contain opposing world views (Uranus opposed by Jupiter 180 deg). Saturn is disposed of by Jupiter in Libra, a balance of social reform ideals. Uranus is disposed of by Mars, now in Virgo,  a sign of yin polarity, as the recent history is analyzed.

Sunday September 17th – The Moon in Leo connects to the grand trine in fire signs, (Aries, Leo and Sagittarius) inspiring action on political and philosophical or religious ideals that are revolutionary or reactionary. Politics and religions become increasingly entangled. Heroic deeds may be witnessed as well, on the part of social or community activists, as the Moon conjuncts Venus in Leo. Community spirit in rebuilding storm damaged areas (Venus and Moon in Leo) adds joy to the arduous work (Saturn), with advance technology to add speed (Uranus) and ease (grand trine). Precise assessments are required (Saturn) for applications online (Uranus).  Technology and creativity converge for a wide appeal.

Monday September 18th – The Moon joins Mars, Mercury and the Sun in Virgo. With the Mars –Mercury conjunction in the earth–mutable sign of Virgo, details are reported and action results! The pace picks up as work forces are on the scene. Mercury’s double approach to an opposition (180 deg) to Neptune retro in Pisces could cause some disinformation in the coming days. News spreads, as do rumors. Debts may be incurred. The Sun (conscious self) is in opposition (180 deg) to Chiron (inner voice of wisdom from past experience) and quincunx Uranus, also sextile to Ceres. Assisting others (Ceres) in difficult situations (Uranus) adds to your own pride and honor (Sun).  The Moon opposes Neptune (180 deg aspect) later in the day, as some light dissipation and recuperation wind up the day.

Tuesday September 19th – Preparation and technique predicts success. The New Moon in Virgo approaches, while Mercury opposes Neptune (180 deg aspect). This could be transforming, if one is not drawn into conflict. The Moon forms a trine aspect (120 deg) to Pluto, a voice of solidarity, then a square aspect (90 deg) to Saturn, as harsh criticism could erupt. Venus joins the Virgo group to make a stellium at the New Moon.  The New Moon in Virgo, late in the day (US times) as a plan for action (or inaction) is devised. Wariness is Virgo’s stance.  All angles should be analyzed. With Neptune in opposition (180 deg aspect), avoid obsessive actions. Your plan should include health and dietary considerations or projects for self improvement.