The creative, feminine side of personality is on display this week, as Venus in Sagittarius tines Uranus in Aries, and expresses no regrets.  We move on, as the Moon in Pisces trine Mars in Scorpio and then forms a conjunction with Neptune as it draws us deeper into the powers of the unconscious mind, dreams and fantasy. At the same time, the Sun in Cap is trine Jupiter in Virgo, expanding our visions for the future. Mercury retrograde in Capricorn is indicative of a revised schedule, delays and communication errors, approaching a trine with Jupiter as well.  Goals are not so clear, with Mars trine to Pisces, but could be intense and visionary, rather than concrete. Working things out on a practical level involves communication and leadership for group involvement.

Wednesday January 13th – Beware of a Pisces Moon! You may be longing for change, or even find yourself reminiscing about past relationships, with the trine to Jupiter in Scorpio.  Hidden treasures might be dug up now, such as the relic of the Revolutionary War found in Alexandria, VA this week.  An increase in dividends, or bonus on your pay check might thrill you, although risk taking is also a tendency here. A Powerball winner would be the one to feel luckiest. One could lose as quickly as one gains under this influence, however. Putting skill and ingenuity to work (Jupiter in Virgo is trine the Sun in Capricorn), however, can help you overcome even the worst meltdown (Neptune in Pisces activated by the transiting Moon). 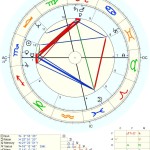 Thursday January 14th – While secrets and crimes are uncovered, repairing damage is the work at hand, with Sun and Mercury in the earth sign Capricorn and trine to Jupiter in earth sign Virgo. As the Presidential Campaign revs up, more embarrassing issues are tossed out, while candidates are in power mode. The Moon in a harsh aspect (90 deg square aspect) to Venus in Sagittarius, more damage may be done to candidates images.  However, it is women who have the ability to verbally parry attacks with ease.  Inspiration and ingenuity (the Uranian influence) as Mars in Scorpio is the dispositor of Uranus in Aries, and Mars in a creative mode with a trine to Neptune.  Hilary Clinton, with a natal Sun, Venus, Chiron and Mercury in Scorpio, prospers with Mars activating her personal power (see above chart with time of 8:02 am- actual time of birth unknown). She also has a healing touch with the Chiron in the Scorpio group, as she is also a wounded healer that Chiron signifies.

Friday January 15th – The Moon enters Aries today, the goal oriented fire sign, and this lunar transit could indicate an emotional retuning to the energy of the day. The expansion of the role of data and analysis of data, as enhancing personal power, could be prominent as to delay the progress towards goal achievement, with Jupiter in Virgo trine to Mercury and Sun in Capricorn. Mars trine Neptune in water signs goes for emotional appeal. Neptune may deflate the Mars aggressiveness, or simply dissolve the intent to harm, adding to an already magnetic appeal. The power of suffering on a massive scale becomes more intense.

Saturday January 16th – The Moon continues in Aries, making a trine 120 deg or easy aspect to Saturn, the power of stability and political achievement is addressed. As the Moon continues in its path, the other planets in fire signs are prompted to get involved.  Impulsive actions aimed at overturning the cart, are followed by a feminine reversal. Pray tell what this means for you, for your relationships and for the community.  The standards and limitations of discourse are evoked, and thus a limitation is put on abusive opponents. Impulsive actions are likely to be regretted.

Sunday January 17th – With the Moon in Taurus opposing Mars in Scorpio, tensions are inherent as the day wears on.  Advanced medical innovations save and prolong lives. Mars trine Neptune today can combine the regenerative effects of science for mass relief. Distribution of goods, surplus from the economic wealth of nations is distributed to war-torn communities. Venus in Sagittarius is in a harsh 80 deg square aspect to Jupiter in Virgo.  The fire and earth signs conflict, yet these beneficial planets produce energy and relief for many.

Monday January 18th – The Moon will be in the easy trine aspect to Mercury and Pluto, before going on to trine Jupiter in Virgo, creating a grand trine configuration in earth signs, as bounty is shared world-wide, brought to those in need of relief, a true virtue for the earth as a whole.  Gaining access to war zones, is an achievement and may help to weaken the conflict overall. It is a good day for humanity.  Individual benefits are also likely, as more people see a more stable and productive future.

Tuesday January 19th – The Moon forms a favorable trine aspect to the Sun before it goes on to the Gemini arena.  This shores up personal status, or material wealth, before going out to meet the world at large.  Personal well-being determines the footing for the battles ahead. While Mars in Scorpio is occupied with the needs of the masses, Mercury is engaging Uranus in dialogue, drawing in world resources, such as UN powers, intent on reducing or achieving a settlement between the warring nations. These energies also represent unconscious forces for the individual, and may be activated in some persons due to aspects with natal planetary positions. Resolving inner conflicts through personal self-analysis or professional analysis is also an outcome at this time.   At this juncture, we can see the overall inter-relationships more clearly in the scientific and analytic world.

Thanks for reading my notes of this week in astrology.
Please send comments or questions to comment@shoshananeshri.com
Gimelstar
January 12, 2016
Jerusalem, Israel