The Moon entered Libra late on Tuesday, as world leaders discuss differences and future problems. Libra is V. Putin’s Sun sign, while Trump’s natal Jupiter, Chiron and Neptune are also in Libra, as he acts magnanimously toward the foreign power’s leader with a reputation as a strongman.  Trump seems to envision himself as the peace maker, while also acting tough to the traditional allies of the US. He acts arrogantly toward the leaders of the Western allies, while expressing divisive attitudes toward the leaders of the Western allies. Trump’s wealth and luck (Jupiter) propelled him into a powerful position, while Putin’s chart with 4 planets in Libra is stronger in positive yang elements (air and fire signs). Putin has close to 20 years as Prime Minister and now President, dealing with adversaries in his own country and abroad, and has a firmer hold on power than Trump does. Trump will have to have any promises made backed up by Congress, while Putin is conceivably the absolute power and leader of Russia. For now we go forward wondering how this relationship between Trump and Putin will change the world.

Wednesday July 18th – The Moon in Libra was trine aspect to Mars retrograde in Aquarius early today, encouraging us to work with partners and like-minded comrades toward a future goal. Mars is in a conjunction aspect with Ketu (the south lunar node) and is likely to focus on past relations, while being a more detached operative. The press enjoys freedom for now. The Moon in a semi-sextile aspect (30 deg, mildly favorable) to Venus as working allies join in a common cause. 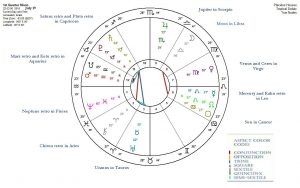 Thursday July 19th – The Moon forms a sextile aspect (60 deg, friendly) to Mercury in Leo as grand schemes may be planned.  A few hours later, the Moon in the 1st quarter phase –square aspect (90 deg, harsh) to the Sun in Cancer–  a conflict opens. Plans may be put aside for more urgent matters. The Moon was in a square aspect to Pluto overnight, awakening more unconscious fears. The New Moon (on July 13th)  opposition aspect to Pluto was the seed moment for the issues that now are becoming clearer. Late today the Moon ingress Scorpio in an opposition aspect (180 deg, tense) to Uranus in Taurus. The inner struggle is intense, now, there could be confusion as well as reactionary, violent strikes. The square aspect to Mars in Aquarius follows, as more aggressive actions may be through electronic media.

Friday July 20th – The Moon transits Scorpio, as powerful voices continue to reverberate. The sextile aspect (60 deg, friendly) to Venus and the conjunction aspect (0 deg, combining) with Jupiter seem to incorporate the impact of the radical events into a package deal.  What can come of words depends a lot on the follow up actions. A reversal (Uranus) could impact the direction of the perceived pact. Putting spin (Mars) on the stated facts could alter the reaction. Adjusting official position (Saturn in Cap) could gradually accept more radical demands (Uranus in Taurus).  A trine aspect (120 deg, easy) from the Moon to Neptune late in the day, moderates or dilutes the outcome, perhaps a dissolution (Neptune) of the harshness of impact, reversing (Uranus) or discrediting policy.

Saturday July 21st – The planets of luck (Jupiter) and charm (Venus) are co-operating today, as personal and social gain is anticipated. Neptune with an opposition aspect (180 deg, tense) to Venus in Virgo represents the powerless or the debtors, whose gain is a settling of accounts.  The Moon in a sextile aspect (60 deg, friendly) to Pluto as some recognition from power centers is beneficial. A square aspect (90 deg, harsh) from the Moon to Mercury in Leo stimulates action. Monetary transfers (Moon) produce energy (Mars) in the economic sphere.

Sunday July 22nd – The Moon makes a trine aspect (120 deg, easy) to the Sun early in the day, prior to its ingress of Sagittarius. The Sun-Moon contact in water signs (Sun in Cancer, Moon in Scorpio) promotes a unified appeal. As the luminaries then progress into fire signs –Leo and Sagittarius–  new energy is acquired for a powerful advance of interests.  Venus sextile aspect (60 deg, favorable) to Jupiter denotes a favorable timing for initiatives.

Monday July 23rd – The Sun in Leo brings summer warmth and fun, health and vitality. A trine aspect (120 deg, flowing) to Chiron helps to bring past wisdom into your life, while a square aspect (90 deg, harsh) may upset the balance today. Saturn in Capricorn, meanwhile, is a slightly moderating influence, with a semi-sextile aspect (30 deg, slightly favorable) to Mars in Aquarius. Chiron semi–sextile to Uranus could moderate the more aggressive Uranus effect of reversals. Moderation in activity would be advised.

Tuesday July 24th – The Moon trine aspect (120 deg, flowing) to Mercury in Leo early today (or late on Monday, depending on your location), allows for acceptance of solutions that are the best under the circumstances.  Venus in a close opposition aspect (180 deg, tense) to Neptune could be the warning of the least favorable results. Negotiating a compromise, or limiting the disaster to a manageable agenda could be the best outcome.

Thanks for reading my forecast and have a good week. Please subscribe online.