The escalation of verbal descriptive attacks by nuclear powers raises a specter or unspeakable harm that is irreversible. This as the Jupiter opposition aspect (180 deg) to Uranus in Aries reaches its apex. While hot words do not always lead to open conflict, the leaders have proven themselves to be predictably unpredictable. This is exactly the scenario that has been depicted by literature over the past century, as a prelude to nuclear war and the decline of humanity on earth.  With a measure of wisdom, I certainly hope that this would be prevented. Jupiter in Libra has moved beyond the limits of President Trump’s natal Jupiter at 17 deg Libra. Trump is now acting without protection of Jupiter, indicating that he is outside his own base support in attacking NFL star’s for instance. His demands for action are themselves a violation of his role and some view as a violation of the limits of his powers, which protect democratic ideals of freedom of speech and personal opinion. We remain a divided nation and a divided world. Neptune in Pisces is in an opposition aspect (180 deg, polarized) to the midpoint of Mars and Venus in Virgo, as communication and dissent are lacking in clarity. Common sense itself (Mars and Venus in Virgo) is bogged down (Pisces) in a swamp of disarray lack of clarity (Neptune). Toward the end of the week, Mars trine aspect (120 deg, easy) to Pluto may bring an event that will be forceful and that seems to capitalize on power and the suggestion of the escalation of power. While Virgo is a sign of caution, Mars is aggressive and Pluto seeks the ultimate position of authority. Is there a winner and a loser? Détente is preferable to the use of force. Pluto can turn either way. We see the two powers (US and NK) engaged in taunts and a teasing that mirror one another. As I noted in a previous post, Kim Il-un and Donald Trump have in their natal charts an opposition aspect of Mars. (See: Adversaries in Power 12 Aug 17 http://shoshananeshri.com/ ) They are war-mongering now, but acting on boasts could be the act of cowardice or inflamed anger. Limiting immigration and securing boarders does seem like a prelude to war. With Saturn square aspect to Mars (in Virgo) and Chiron in Pisces, the sobriety of the legislature (Saturn in Sag) is the balance and the holder of restraint. So Jupiter in Libra (diplomacy) is in an opposition aspect to Uranus in Aries (use of force). This is the international threat facing the world today.

Wednesday September 27th – The Moon in Sagittarius transits Trump’s natal Moon, as he tangles with sports officials and the behavior of team members with regards to the national anthem, a tradition (Saturn in Sag) and Trump’s own legacy as a sports promoter (failures in that area) with Uranus trine (120 deg, flowing aspect) to Trump’s natal Mars in Leo (self-promoter and pride in self) may be a deflection from his interaction with Kim Yong-un or another instance of this self display. His attacks seem to be but skin deep, and in the end will probably amount to little, but may also be a stepping-stone to further action.  He seems to want absolute power of the tweet. The transiting Moon forms a grand trine with Uranus and Trump’s natal Mars giving him an arena, a space to sound off. The transiting Moon also is in an opposition aspect (180 deg, conflict) Trump’s natal Sun. this is another indication that he will now project his ego, his power center, into the media, the world scene and especially sports issues. He goes beyond the traditional role of a sitting President, with impetuous behavior (Uranus) and is unlikely to repent or apologize (he never does).   Transiting Saturn is exactly in opposition (180 deg) to Trump’s natal Sun as he puts his will above all tradition or conformity. The world will finally know that he has won. With a negative reaction to the harsh exchange, there is increased urgency for diplomatic solution. Moon sextile (60 deg, friendly) to Jupiter is favorable for to avoiding, with the use of intervention and diplomacy, a slide into the use of force (Moon trine Uranus). 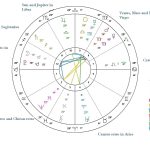 Thursday September 28th – Mercury in Virgo is in an opposition aspect (180 deg, conflict) to Chiron effectively blocking inner wisdom (Chiron) for the sake of practicality (Virgo) and effective communication (Mercury) while the Moon now in Capricorn is trine aspect (120 deg, easy) to Venus and Mars positions in Virgo will transit Pluto, for the final analysis. This could touch off the power play, or subject the actions to internal criticism and finally suppress or overcome objections.  With Mars in Virgo trine aspect to Pluto, activated by the transiting Moon, aggressive concrete actions (earth signs) may be involved now. While the world fears that Trump and Kim will go off the deep end, there is the counter-balance that they both should be smart enough to know not to. Mercury is also in a quincunx aspect to Uranus, while semi–sextile (30 deg, mild support) to Jupiter, as more creative solutions are sought for the end of the conflict, a war of words and threats of annihilation.

Friday September 29th – Venus has reached the opposition (180 deg aspect) to Neptune in Pisces, as warnings of humanitarian crisis present and possible future man-made crisis are overwhelming and convincing. Future generations will have to clean up after the mess if our leaders are so bold and unresponsive to warnings. Jupiter moves beyond the point of opposition to Uranus, although the aspect remains in effect until October 10th. The Moon in Capricorn will form a T-square configuration (three planets in harsh angles) with the opposition today, for a few hours, giving an opportunity to seek a balance in the conflicting war of power words. As the day continues, the Moon will trine (120 deg aspect of ease) Mercury at 29 deg Virgo. This is a neurotic degree promoting possible final display of threats, as a stance is backed off. Mars in Virgo forms a trine aspect to Pluto (120 deg easy) as international demands and sanctions are put in place.  Ceres at 1 deg Leo is in an opposition aspect to the Moon in Aquarius, as a supplication for the fate of innocent children is made.

Saturday September 30th – Mercury ingress to Libra today, is in a trine aspect to the Moon in Aquarius. This trine aspect (120 deg, easy) furthers the calming of the situation with more measured words. The Moon will then form a trine aspect (120 deg, easy) to the Sun in Libra promoting general ease of movement and a less threatening atmosphere. While tensions remain (Uranus is still in an aspect of opposition to Jupiter), there is a more optimistic outlook now. The Mars –Pluto trine aspect remains in effect, as does the opposition aspect between Venus and Pisces. There is a greater sense of achievement now, however, as major difficulties are overcome.

Sunday October 1st – As Venus approaches the conjunction (0 deg aspect) with Mars in Virgo, more co-operative work is accomplished. Venus can supplement Mars action, reducing aggressiveness, as the more evolved form of Venus might be able to work here effectively. While beauty (Venus) may undermine aggressiveness (Mars), the more evolved equation could be the cooperation and mutual respect necessary to further the humanitarian and technical work at hand. The Moon in Aquarius quincunx (150 deg aspect) Venus could also work to adjust the aggressive nature of Mars, working on practical issues, as in the workplace, while Mars trine to Pluto could implement some incentive for a fundamental change in attitude.

Monday October 2nd – The Moon in Aquarius is trine aspect (120 deg easy) to Jupiter in Libra early in the day. This could promote a better understanding between adversaries. Then the Moon ingress to Pisces happens a few hours later, as a chance for pride in accomplishment may be defeated as well. There is more work to do in the sphere of human recourses, management and humanitarian crisis. Escape from a deteriorating situation is temporary at best, as new issues for repair (Virgo) and redemption (Pisces) arise.

Tuesday October 3rd – The Moon transits Neptune in Pisces today, as emotional complications surface.  The opposition aspect (180 deg, tense) to Venus and Mars follows, later in the day. Redemption and reunion are one possibility now, as gathering with community and co-workers take place. A catharsis (Neptune) is possible to reach a new understanding between alienated or disgruntled co-workers or family. The weakest point in the chain of relationship can now be identified, and some better understanding and procedures (Virgo) established.

It is my hope and aim that the process outlined here may help others develop awareness and overcome issues by allowing the universal energy to be recognized as the flow of human activity continues day by day. The timing of the events, the relevance to personal lives will vary, of course. You may have a strong connection in your personal psychological makeup, your natal chart, or may have none for any particular day, depending on your natal planetary positions. When your natal chart is compared to the transiting planets more details and more enlightenment follows.