As ballot counts trail in, the hope of the nations, the beacon of free speech and human rights, the refuge of the tattered and yearning to be free, a nation that hopes to overcome a crisis in political and governmental policy with a surge to the polls that could remove a legislative advantage for a sitting President that has lost the consent of the nation he governs, could change the balance of power for the US and its concerns internationally. This could be the first domino to fall, the first verifiable step in reducing the power of the current POTUS. With the New Moon on Wednesday, and a Mars–Venus trine aspect building, the quincunx aspect from Jupiter to Uranus retro could build a revolution or deflate it. As there are always two sides to Uranus, the rise and the fall, the victor and the vanquished, may the better team win. 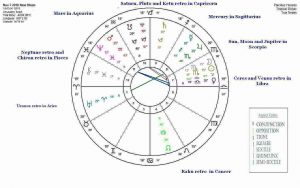 Wednesday November 7th – The New Moon at 15 deg Scorpio is at one of the most pivotal and occult degrees of the zodiac, along with the opposing degree in Taurus and the 15th deg in the remaining two fixed signs of Leo and Aquarius. As the this is the 16th degree today, the advancement beyond the 15th degree gives a better understanding of the process involved. What has just happened is historical. As a true test of democracy, it has the full impact of cyber political maneuvering for votes, accusation of dishonesty, and hyperbole rebound. Individuals tend to vote for their own interests and for their party affiliation. The two may be in conflict this political season. At the New Moon, we are witnessing a new cycle beginning in the celestial display.  We are prompted, thereby, to take a step forward for a change in power and program. From the depth of human despair, the caravan of potential asylum seekers progresses to the US southern boarders to be met by official and military back-up. Is this the greatest threat facing America?

Thursday November 8th – Uranus backs into Aries as Jupiter progresses into Sagittarius. A strong Jupiter could outdo a weakened Uranus to outdo the maverick in the ballot box. The wheels are turning and the atmosphere is changing. The Moon egress from Scorpio today, and ingress to Sagittarius to a conjunction with Jupiter with Mercury also in Sag.  The increase in fire sign domicidality (to coin a phrase) increases the push to change to originate (Aries) and conquer the political battleground (Sagittarius).   Mars in Aquarius – the fixed–air sign– doubly approaches Venus retrograde in Libra– the cardinal–air sign. Mars can celebrate success and the drive for recognition, while Venus and Ceres conjunction in Libra celebrates a balance of power. They complement one another now. Their aims have merged and produced results. Early in the day, the Moon in Scorpio is in a trine aspect (120 deg, easy) to Chiron in Pisces, for feelings of satisfaction or relief.

Friday November 9th – The Moon is in a conjunction (0 deg, combining) aspect with Mercury in Sagittarius today, as final results are announced with fanfare. Venus and Mars rejoice together (see notes for Thursday) while the Sun approaches a friendly sextile aspect (60 deg) to Pluto in Capricorn. A government political system is strengthened. The Sun in Scorpio is disposed of by Pluto, as Pluto is the ruler of Scorpio. Pluto is disposed of by Saturn in Capricorn, a final dispositor along with Venus in Libra. Uranus and Mars are in mutual reception, an indication of revolution, while the Sun and Pluto point to regeneration. The revolution (Uranus) is contained within the system, as the system is renewable (Pluto) and changes with the demands of the day.

Saturday November 10th – The Moon transiting in Sagittarius can monitor and judge disagreements of outstanding issues, while sextile aspect (60 deg, friendly) to Venus on the one hand, and to Mars on the other. The Sun and Pluto are close to agreement in the sextile aspect, with individual and collective rights addressed. The Moon is then trine aspect to Uranus, indicating that revolutionary philosophies may be integrated into practice. With digital communication (Uranus) and information banks, the playing field is enlarged. Access to information creates an openness in government that necessitates new guidelines and legal challenges.

Sunday November 11th – The Moon in Capricorn makes a conjunction (0deg, combining) aspect with Saturn early in the day, as authority (Capricorn) is reaffirmed and renewed (Moon) along established regulations (Saturn).   With Mercury approaching a square aspect (90 deg, harsh) to Neptune in Pisces, some disillusionment becomes apparent. The Sun – Pluto sextile aspect (60 deg, friendly) remains active, and could delay (Pluto) or even reverse the expected structural (Capricorn)changes.

Monday November 12th – The Moon in Capricorn is conjunct (0 deg, combining) aspect to Pluto in the early part of the day, as possible challenges are made in efforts to overturn decisions. Saturn in Capricorn is the dispositor of Pluto and the Moon, and a final dispositor along with Venus in Libra. A balanced (Venus) judgment (Saturn) is requested, as the higher courts are called to order. The Moon then moves to the square aspect to Venus and Ceres in Libra, upsetting the balance or outcome. The sextile aspect (60 deg, friendly) to the Sun increases the power of the challenge. At the end of the day, the Moon in Capricorn in a square aspect (90 deg, harsh) to Uranus in Aries denies the challenge itself, as an alternative decision would undermine stability (Saturn).  This seems unlikely with a strongly placed Saturn as a final dispositor of Pluto.

Tuesday November 13th – The Moon in the final degree of Capricorn is conjunct (0 deg, combining) to Ketu, as the decision requested is threatens stability and continuity of political office. We look to the past for precedent in the decision-making power.  The Moon moves into Aquarius for a more enlightened view.  The Moon is sextile aspect (60 deg, cooperating) to Jupiter in Sag. The controversy continues.