The threatening repartee from the dictatorial leader of North Korea, Kim Jong Un, and President of the US Donald J. Trump in the past week have suggested to the world that we may be on the brink of another war. Reactions vary however, although the personalities of the two leaders are definitely an important factor in this escalation of words and threats.

While Donald Trump’s birthdate and time are well known, the N. Korean dictator’s birth records are more obscure. Various dates were given at various times, however, the record from S. Korea and that of Kim’s American friend Rodman concur that the date in 8 January 1983. So I have used that birthdate with an unknown time to calculate Kim’s natal chart.

At the young age of 29, Kim Jong-Un was the most powerful person in N. Korea, the heir to the Kim dynasty, with a powerful and disciplined military and a suppressed population of families and workers. The famine of 2009 resulted in thousands of deaths. Then, just two years later, the young leader took the reins of power.  He has continued to build the potential for a military equipped with a nuclear bomb. Now that he has the capabilities, he threatens the US, and of course, President Trump threatens back. 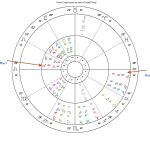 Kim Jong-Un’s chart has all planets within the trine of Mars in Aquarius and Pluto in Libra.  His natal Mars is directly opposed to Trump’s natal Mars in Leo. Trump’s natal chart has all planets except the Moon within the trine of Jupiter in Libra and Uranus in Gemini. They both gained power as a result of their fathers and grandfathers positions or wealth. They are very close to mirror images of one another. Neither of them can or will stop bantering one another. Restraining forces on both sides will be left to moderating influences of a third party.

Looking at the US Congress, there is Mitch McConnell as the leader of the majority in the Senate. Trump would need the consent of Congress to declare war, and has limited capabilities on his own initiative. Mitch McConnell has also raised Trump’s ire with his comments that Trump is new in a government office and does not understand how legislation takes time, in connection with the healthcare bill that did not pass by one vote.. This served as some distraction for Trump who lashed out at McConnell after his taunts to Kim Jong-un. 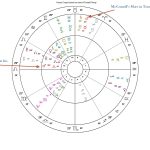 With his approval rates slipping, starting a war would be a possible way to regain loyalty in the country. An outside enemy could bring the infighting to a close. McConnell’s natal chart shows that his Mars in Taurus is square to Trumps Mars (a harsh aspect 90 deg). While Trump is engaged in a war of words, a combative tug-of-war, with not winner, McConnell and Trump are in conflict, but the power is unequal. McConnell is not likely to strike back at Trump. However, his power in the Senate is strong, and will not be diminished by Trump’s comments. There is a way for McConnell to gracefully side-track the attack. In fact, McConnell’s  natal Mars stands at the focal point of the Mars to Mars opposition of the two adversaries, Trump and Jong-un.

McConnell may be in a position to mediate, to intervene in the war of words and bring a more calming influence to the situation. We shall have to wait and see if that develops.

Trump has opened a new possible confrontation for the US Army, a military action in Venezuela. This intervention has no precedent. Trump is intent on building up American military might as opposed to social programs. Certainly the active Mars on Trump’s ascendant would indicate direct and militaristic action. In Leo he would be boastful about his military might.

If you have enjoyed reading this post you are also invited to receive the weekly astrological forecast by email, published each week on Tuesday.  Please enter your email address  in the form on the right column. Thank you!