This week we have a return of the powerful configuration of Jupiter in Libra opposing Uranus in Aries. Libra and Aries are both Cardinal signs, with direct action, or outward force.  In opposition, they tend to collide or block one another. Mercury and Sun in Aquarius, help to form groups of like-minded friends. Uranus rules Aquarius, and thus the opposition aspect to Jupiter is of a friendlier nature. Progress and achievement then become possible with super-speed enhanced creativity.

Wednesday February 15th – Here we have the Moon transiting Jupiter, giving increased mobility to the balancing energy of Libra.  Friendships with compatible energy help to achieve goals.  A shift in strategy is desirable under this influence. Social contacts and charitable organizations help with adjustments. Legal requirements can be mitigated at this time. The Moon’s opposition to Uranus could soften the focused Uranus energy, as though to draw out some of the most radical of the positions. With Mercury in Aquarius and sextile aspect (60 deg approaching) to Mars in Aries, direct actions taken under advisement, attempt to abate and heal (Chiron is quincunx – 150 deg. aspect- to the Moon and Jupiter retro). Attention to solving problems can help avoid serious harm in the future.

Thursday February 16th – The Moon leaves the Libra balancing act to plunge into the depths of Scorpio. One outcome may be seen in the POTUS. There is interest and engagement with the moves of the Trump administration, so that he feels he is unfairly stigmatized. Losing an appointee who was vulnerable could strengthen or weaken his hand. As one who thrives on chaos, his options seem more confused. Can he pull off a commendable recovery? A man with seemingly endless resources and the ear of the nation might be severely handicapped if he doesn’t get it right now. With transiting Jupiter square aspect to his natal Saturn in Cancer (35′ orb), he can feel as though his very status is undermined. It may be so, and it remains to be seen if he can overcome this crisis. The transiting Moon opposed to Ceres in Taurus at 3 deg, will call attention to the humanitarian needs. Attention to the basic needs of the family and nation at this crisis point could be the path to redemption.

Friday February 17th – The Moon trine aspect (120 deg) to Neptune, and with the Sun in the final degree of Aquarius, you could be searching for the right approach, the formula to success, and gain a hunch from the unconscious (or super-conscious), the Moon in a square aspect to Mercury in Aquarius could then be a hunch or an informant. Setting up a business or a new strategy often depends on the contacts and connections you make. Pluto in a square (harsh 90 deg) aspect to the mid-point of Mars and Uranus in Aries is a crucial test for the durability and acceptability of the structure.

Saturday February 18th – The Sun ingress Pisces is today. A conjunction with Neptune is days away. The situation of a dam in northern California that lacks a safe overflow backup is at the tipping point. Other problems mirror this effect.  With Saturn (structure) square to the Uranus–Mars (explosive disaster) conjunction in Aries, the situation couldn’t be more threatening.  The exact conjunction of Uranus and Mars occurs on February 27th, although increasing tension could lead to the triggering of this effect in the coming days. With perhaps multiple situations responding, there could be multiple disasters in the near future. With the Moon in Scorpio, ingress to Sagittarius later today, as the 3rd quarter Moon represents a crisis in the implementation phase of the cycle. Mercury sextile aspect (60 deg) to Mars–Uranus conjunction is a possible trigger. This aspect (60 deg) is a working trine, and could represent scientific applications (Aquarius) to problem solving. However, the Uranus–Mars contact is very dangerous, and may not be amenable to any proposed fix. Venus in Aries is disposed of by Mars, so that approaching conjunction is another trigger.

Sunday February 19th – The Moon in Sag is square (90 deg) aspect to Neptune, a possible easing of the stress, as Neptune is likely to absorb more, and in watery Pisces, expand beyond the limits. Flooding could then result in some areas, if rainfall continues. As the Moon is also trine aspect (120 deg) to Venus in Aries, rescue services (Venus) are provided with spontaneous action (Aries). However, the situation described in the post for Saturday continues. 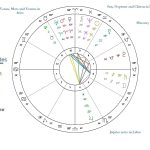 Monday February 20th – The Moon in Sagittarius trine to Uranus in Aries (fire signs) and sextile to Mercury in Aquarius (air sign), is a possible rush to legislate solutions. Mars square aspect (90 deg harsh) to Pluto undermines the structure, also indicates a breakdown in diplomacy or government policy.  Radical (Uranus) solutions (trine aspect) to Moon–Saturn in Sagittarius could be applied to maintain order (Saturn). Mercury is doubly approaching a trine aspect (120 deg) to Jupiter retro in Libra, as international (Aquarius) media (Mercury) rushes to provide information around the globe.

Tuesday February 21st – The Moon enters Capricorn, as a more structured view is taken of damage and the situation is reviewed professionally. Mars square aspect to Pluto indicates a possible overthrow of existing political or establishment structures. Recovery, as the Moon approaches Pluto, could be slow, even though damage is devastating. A transformation of existing power structures could be underway. A peaceful transfer of power is also possible. Yet, to maintain the balance of the opposing forces presents a difficult problem. Demanding truth (Mars square Pluto) requires undermining (Pluto) the existing façade (Saturn in Capricorn).